Tshilidzi Rambau is determined to reach his acting dream

Tshilidzi Rambau has appeared in various South African soap operas, including Isidingo and Skeem Saam, among others, as a background actor.

Most recently he has been featured on Generations the Legacy, playing the role of influencers.

Rambau, a third-year journalism and media studies student at Damelin in Pretoria, is adamant that he will reach his dream of being a full-time actor one day and hopefully grace television screens regularly.

Born in Louis Trichardt before his family moved to Tshivhuyuni village in the Mashamba area, the 23-year-old aspiring actor developed his acting passion when he was at Lishavhana Secondary School. “I started acting when I was in high school. I used to act while at home and at school with some of my friends, until I met someone who advised me to find an agency,” he said.

Rambau did not allow where he came from to stall his passion.

With his acting debut only occurring last year, one of the most notable roles he is known for is Jabulani – an unwilling hero who has to go on a journey of discovery, from being a good boy to being a playboy who proved his friend wrong in the Mzansi Biskope movie Wrong Type.

“I believe in myself and I know everything is possible with God,” he said.

He hopes to inspire local youngsters to believe in themselves. “Believe in yourself and always put God first, dream big and know that everything is possible. You can be anything you want, and success doesn’t discriminate, regardless of where you come from,” he said.

He reckoned that he had worked with many production companies that helped him understand the dimension of acting and the entertainment industry. He hopes to be featured on local screens often.

He said that he had drawn some of his inspiration from people he met in the industry. “We learn every day, and I want to see myself working acting full time since I perceive this career as my future.” 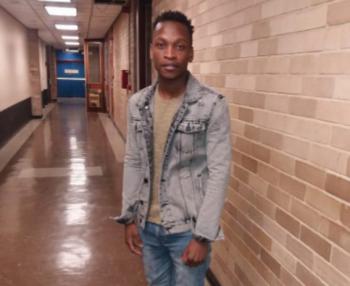 Tshilidzi Rambau hopes to inspire young people to believe in themselves.