A young man admired the art of the late, internationally acclaimed sculptor John Baloyi and took it upon himself to sit around the artist's workshop, observing him at work and asking him a lot of field-related questions.

When Baloyi noticed Khathutshelo Mufamadi's zeal in acquiring more knowledge about the workmanship of sculpting, he decided to mentor the young man. “I learnt a lot from John Baloyi, how to treat the wood and experience life,” Mufamadi said. “I spent most of my days in his studio and gallery, learning from the master. When he passed on, I was heartbroken. I had lost a master of the craft.”

He indicated that his love of art had developed when he was still at primary school, where he was fond of drawing. “But then I also discovered that I had talent for wood carving,” he said. “My life as a young artist changed quite a lot when I met Mr John Baloyi. He not only taught me how to treat and carve the wood, but also how to develop a vision and orientation in life.”

In 1997, he was chosen as the best student in wood carving and was invited to represent the province in a national arts and culture competition. “The fact that I was chosen as best artist encouraged me to continue to carve wood,” he said. “I have experienced and experimented with the craft of wood carving to an extent that I cannot think about my life without art.”

However, Mufamadi had other institutions and individuals who also supported his art and artistry, such as Leshiba Arts and Craft School, and Paul Tavhana. “I was now majoring in wood cutting and carving snakes and other artistic items,” he said. “In life you need to work hard and earn a living; that is what gives meaning to one's life.”

He has so far sold his art to locals, art collectors from around the country and those who visit South Africa from foreign countries.

Mufamadi is also a poet of note, who has recited his poems throughout the country. He has also released a poetry album, entitled Muthu ndi a thanya (2006). 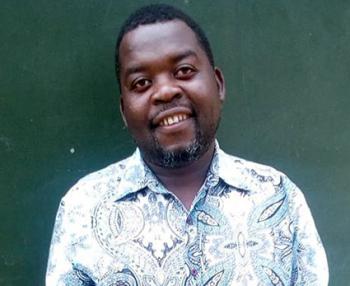 Khathutshelo Mufamadi is a sculptor who has learnt from the great masters of the craft.