Chiganja of Mushiru outside Thohoyandou, who made name for himself in the reggae arena with songs such as Ha tsha Tamba, passed away last year at the age of 53.

During his funeral, artists who had come in their numbers to bury him promised to take care of his family. True to their word, on Saturday an event, dubbed the First Annual Tribute to Jahman Chiganja, was held in his memory.

A game of soccer by a team comprised of artists and actors and the local veterans was held in his honour.

Different artists shared the stage, dishing up their music and that of the late Chiganja. Well-known artists such as Colbert Mukwevho, Ntshenge and Jah Live, and veteran radio presenter Mr Thivhulawi Nyadzhiwa were among those who participated.

Event organiser Mr Khakhathi Tshisikule said many artists died and were forgotten in no time. "This has got to stop; we are starting a new page with the death of Jahman Chiganja. Chiganja has done a lot to improve and popularise reggae music in this area. We have taken a stance as artists to look after his family even after [his] death, that is why we have given the family money to support them. This is just the beginning; we will be doing this annually in his remembrance," he said.

Tshisikule further indicated that the project would be developed into a foundation that would offer bursaries to needy students as Chiganja had been an educator who had loved education.

Chiganja's wife, Ms Aidah Muthude, was overwhelmed with emotion. "This day reminds me of my husband. I cannot say whether I am happy or not, but as a family we are very humbled by this gesture. It shows that there are still people who care, and we will continuously thank the organisers," she said. 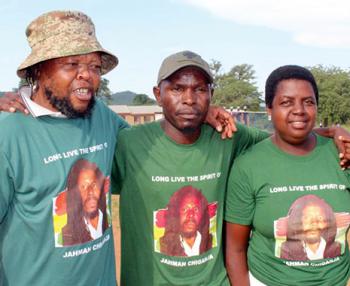