Ravele publish third volume in the “Sin of Man” trilogy

The highly creative writer who sees the world from a spiritual vantage point has just written and published a third volume in the Sin of Man trilogy, Vhadededzi Vha Shango, which can be loosely translated as Teachers of the World.

Mmbangiseni Tshidonngi Ravele said that it had taken him just a year to pen this book in the trilogy.

“Let’s just say it took a year to arrange Vhadededzi Vha Shango into what it is today,” he said. “What I did to make this book was to take a paragraph from Sin of Man 1 (Mikosi Tshavhaloi Tsha Hashu) and work it into a long play, or what we normally call a drama book. The first book is an oasis to which one goes time and time again to quench one’s thirst.”

Vhadededzi Vha Shango tells the story of two female classmates, Musiiwa and Pretty. Musiiwa is an orphan who lives with her grandmother, Vho-Nyamukamadi, while Pretty comes from a well-to-do family. Pretty's mother is a teacher and her father works far away in the big city. Pretty's father also forgets the way that leads home by staying in the city for far too long. In her loneliness and unhappiness, Pretty's mother gets into a clandestine relationship with a local pastor.

“Despite the ordinariness of her life, Musiiwa's life is respectful and full of joy and happiness, while Pretty tries to replace the love of a father by falling in love with a teacher at her school,” Ravele said. “You can see that the sin of a mother has a way of repeating itself with the daughter in this narrative, hence the 'sin of man' of the title.”

Ravele said that he had decided to look at the world through the eye of a philosopher and delve into the private lives of teachers and their private spaces to show that they are not just people with chalk and a duster in their hands, standing in front of a class.

“At the end of this story, poor Musiiwa finds a bursary to study further while Pretty is rushed to the hospital after attempting to abort a pregnancy she got from sleeping with the teacher,” he revealed. “In this story, we identify different forms of communication in different houses, which lead this or that child to live in this or that manner.”

Ravele agreed that the writing journey was a lonely and assiduous one. “I won’t lie – it is not for the faint-hearted ones,” he said. “You will need more hours of ‘me-time’. Social life sometimes shuts down. Actually, do it because you have the love to do it. If it is money that you are chasing, most of the time you will be left disappointed.” 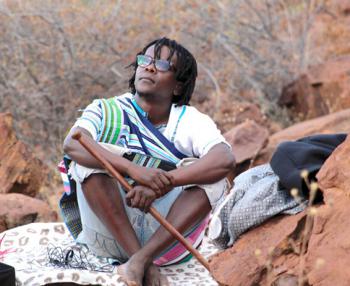