Youth get creative in recording studio

A gentleman with a heart of gold recently set up a recording studio to help launch the talents of many young and old artists.

“I want to help as many youths as possible here in the Makhado area, so that they realise their music talents,” said Sewata Ramaleba, the studio’s executive director. “We already have more than 10 youths attached to our recording studio and the talent is amazing.”

Waya Waya studios were set up late last year at Madombidzha Zone 2, in the Sinthumule area.

While Ramaleba has expertise in the operations of a recording studio, he had chosen to offer young men and women a chance to hold key production positions in the studio, so that the studio would really belong to the people and not just to the founder.

“I don't underestimate the talent these youths have, because I know and I have seen that they are capable of making good music from beats and lyrics to project packaging,” he said. “The youths, if they are monitored well and are given constructive guidance, will amaze you. Just given them a space to be themselves artistically, and they will be creative.”

Waya Waya Entertainment is not just an average recording studio, but an institution of learning, practice and excellence. Its head producer is the 20-year-old Phillip “Crosswave” Masengane, who joined the studio early this year. “I learned beat-making from the comfort of my bedroom on my laptop,” he said. “Today I am happy that the first-hand basic knowledge in beat-making has just landed me a post of a producer at Waya Waya. I feel at home when I am in the studio, surrounded by the artists whom I am working with.”

Ashley “Esh Graphics” Ramaru (20) is the chief graphic designer in the studio, and he also sings in the hip hop and RnB genres. The expertise of Esh Graphics means that the recording studio hardly seeks the services of a graphic designer from external service providers. “I learned graphic design way back, in fact at the age of six, when my mom taught me drawing,” he said. “Today I am a computer wizard.”

Kagiso “Kay Gee Splodge” Maphakela (22) is an accomplished singer whose talent needs neither verbal nor written introduction. “Words are cheap – just have some time to listen to any of my songs and you'll have something positive to say,” he said.

The kind of music being made at Waya Waya is streaked with innovation, experimentation and uniqueness – the characteristics that all make the music fresh to listen to and enjoy. 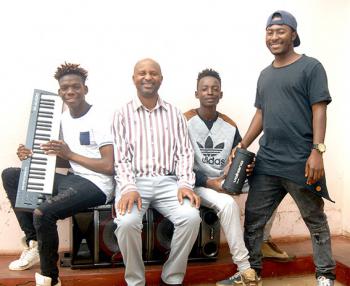