The Arts and Painting Youth Development Project at Ha-Masia village outside Vuwani recently received a shot in the arm when Eskom Limpopo presented them with art, painting and wood-carving equipment of more than R100 000.

The project leader, Mr Pfarelo Mulaudzi, said that the project had been started in 2016 but started operating seriously in October 2017. Their aim is to train young, unemployed drug and alcohol abusers to change their lives for the better and create a meaningful life in the communities where they live.

“We hope that, after training of the young people in painting and wood carving, they will be able to create jobs for themselves and other people and help to fight poverty. There are currently about 30 students who are receiving training in the Masia Community Resource Centre,” said Mulaudzi.

According to him, with the help from the power utility, they hoped that their project would go from strength to strength and help to create jobs in the surrounding communities such as Vyeboom, Matsila and Kuruleni.

He said that before the project started, most of the youths had been unemployed and roaming the streets, “but things have changed for the better as they are starting to be meaningful community members”.

Speaking during the handing over of the equipment, Eskom’s senior supervisor at the Hlanganani Network Centre, Mr Edwin Matshaya, said finding young people who were taking the right direction to improve their lives was encouraging.

“We would like to take this opportunity to encourage people to use electricity wisely and teach the children the safe use of electricity. We are also experiencing a high volume of cable theft in this area, where cables and conductors are stolen. We lose revenue and production, and it is also a risk to customers,” he added.

Rev Norman Ligege, who spoke during event, said life would change for better for the young people who used to roam the streets where they could end up doing crime. 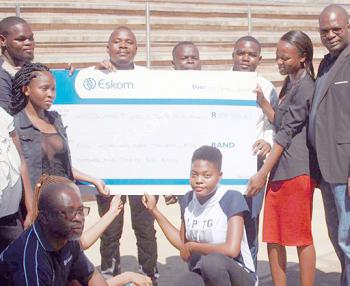 Some of the jubilant trainees at Masia Arts and Painting Youth Development Project, photographed with the cheque, while the represantative of Eskom's Hlanganani Network Centre, Mr Edwin Matshaya (right), looks on.