The star of a reggae music singer, Jah Lady Dorris, continues to shine brightly and this was further accentuated when she launched her new CD, Vhutshilo, a fortnight ago.

The event was held at Randima Tavern and Restaurant, where Jah Lady Dorris received the support of other artists who came to share the stage with her. They included, among others, Mariana, Cornerstone, Elekanyani Tshabuse, Mashudu Nematoka, Jackie Nethomboni, Alingo, Tshilombe, and Moses Musenwa.

“The fellow artists had shown me love and the fans at Madombidzha village reported to me that they had enjoyed our music on that night,” she said. “It is my pleasure to have taken my music to another level with the release of Vhutshilo.”

Jah Lady Dorris is continuing to cement her music career and one of the supporting artists, the highly talented Jacky Nethomboni, attested to that when he said that he was always moved by Jah Lady Dorris's energy and enthusiasm. “She's got a 'spirit' (amazing energy) and this is what is needed in the music industry,” he said. “You need to keep your head high and above the water in order to keep going.”

Jah Lady Dorris started out as gospel artist and only later made a transition from the genre to reggae music. “It had all made a difference for me and my music career ever since that time,” she said. “It had been a discovery which I thank God to have helped me see it.”

Vhutshilo was produced by the talented and celebrated local engineer, Hani Mutele, at Hinote Recording Studio.

When she performed the songs from Vhutshilo on Saturday night, it was a sure experience that she is a talented singer who possesses a great gift. 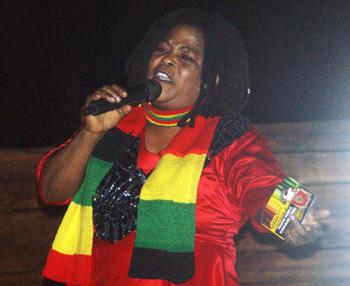 Jah Lady Dorris in action during the launch of the new CD.