A newsreader with a hint of inspiration

“I come from the most rural area and my aim is to put my community on the map, so that the youth can look up to me for motivation and inspiration.”

A talented young newsreader at Makhado FM, Thaidzo Sebadi, sees himself as only a functional organ within a larger system, which is a community.

For a community to function effectively and realise its unwritten objectives of having successful young men and women who become pillars of that community, those who believe in community building must work harder in writing a good story.

“I am writing that good story,” he said. “I started my journey as a newsreader at Musina FM, but when I saw a post as newsreader at Makhado FM, I applied for it and my application was successful.”

Thaidzo is a resident of Muswodi Tshisimani, some 126km from Louis Trichardt, and he has found a new home at the radio station and the communities within the station's radius. “If you love something a lot, and that thing has become a way of life, you'll leave the other things that you also love and first attend to this other thing first – for me, that's radio,” he said. “I had come all the way from Muswodi and found a new home in the Makhado area.”

His love for radio started when he was a young boy when he listened to the radio and imitated the presenters and newsreaders. In most cases, he was invited to be master of ceremonies during private and community functions, where he excelled with his unique voice.

“I realised from that very experience that I am a good, effective communicator,” he said. “I needed a larger audience and then radio became my next station. This is not my destination because – I know – I am destined for greater things in life.”

Thaidzo is available for services as a master of ceremonies and can be reached on 071 257 3805. 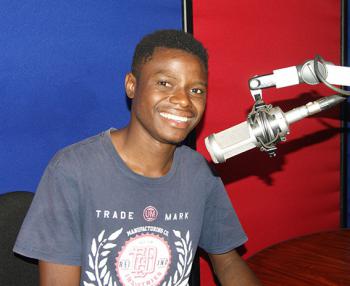 Makhado FM's Thaidzo Sebadi sees himself as only a functional organ within a larger system that is a community.