A 21-year-old woman has found a unique way of raising awareness about the problem of the violent abuse of women and is helping to do so through her art.

The artwork of Lebogang Sharon Serakalala might, however, shock many people and leave them asking many questions about the person in the image, who might have done this or the kind of violence that causes such vicious injury to another person.

Her work consists of images that she takes of herself and other persons after she has worked on their bodies – legs, arms, foreheads or faces – using special-effect make-up. According to her, “women are beaten every day; some are even murdered, and that's not a good thing at all. It's so sad to see our mothers and sisters being beaten up and sometimes being beaten to death. No human being deserves that.”

Lebogang wants her art to conscientise people about the challenges that women face and the violence they have to endure in today's society. “The violence is so disturbing in that some women are afraid to talk about it,” said Lebogang, who resides at Moletjie, near Vivo. “My prayer is that perpetrators would also see my images and realise the extent of their violence and stop abusing women. They are hurting our mothers and sisters.”

She grew up watching scary movies, such as horror movies, with her brother, but she did not find them to be scary because she knew that they were only works of art meant for entertainment. “This is one reason I also enjoy doing scary-wound-effect make-up,” she said.

However, this self-taught artist explained that she had started by doing normal make-up on birthday celebrations, baby showers and weddings and that she only realised later on that she could do more than that. “I have passion for it and enjoy doing it,” she said.

She believes that her talent might come in handy in the film industry. “Anyone who is doing movies is welcome to contact me, so we can strike a deal,” she said. “All that you see in those great movies – the injuries and more – are works of special-effect make-up artists like me,” she said.

She said her family and friends supported her all the time. “They share my sentiments of issues of women abuse, and also celebrate my art for what it is,” she said. “They believe in me and think that my work can find its way into major movies one day.”

She is currently studying civil engineering at Capricorn TVET College. For the love of her community, she also runs a campaign, Pick and Dress a Baby, where she collects clothes and donates them to the needy.

Lebogang is available on Facebook as Lebogang Sharon and can be reached on 079 910 8135. 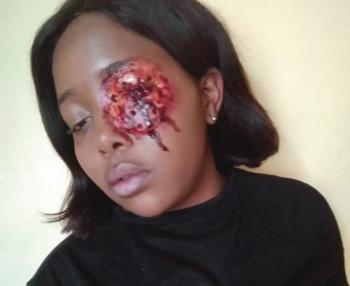 A model with a bruised face.