Her sense of humour, captivating voice and personality keep listeners' ears glued to their radios. Her radio name is Bumbalicious – it's a combination of bumba and 'delicious' (as found in most English words that describe good things).

In Tshivenda, bumba refers to a chubby person, and now we have got Bumbalicious on Makhado FM as the host of Morning Connections, which airs between 03:00-06:00.

She is the actual darling of the airwaves and her fans or Makhado FM's listeners can surely attest to that fact.

“Some people wake up in the middle of the night and do not get sleep again,” she said of her show. “So, with Morning Connections, I keep them company until the sun rises. On my show, I play the kind of music that all people love; the kind of music that makes them feel comfortable and restful right in their beds until they get up.”

Bumbalicious had discovered her talent in communication and entertainment when she was growing up at Mpheni Block C, where she would record some clips of herself talking on her cellphone and send to friends via WhatsApp. The friends' response was heart-warming in that they encouraged her to either consider singing or doing a course in media studies, so that she could work for the radio and as a master of ceremonies or motivational speaker, since she has an amazing voice that is suited for a wide range of careers in the communications industry.

“I knew that I had a finer but most captivating voice,” she said. “Public speaking comes to me with ease, just like rain falling softly from the sky.”

She joined Makhado FM after her talent was noticed by the comedian, master of ceremonies and local DJ Huli Hula Hulest, also known as Hulisani Mathivha. “I started by presenting Gospel Avenue and I was later moved to Morning Connections,” she said. “So far, I have managed to raise the listenership for my programme to the extent that even the management is satisfied with the manner in which I man my show.”

Bumbalicious is one woman who is happy to live in the country of South Africa, where a lot of opportunities exist for all people to help better one's life. “Whatever I need in life, if I pursue it, I know I will eventually get it – and that's what I love most about my country,” she said.

She mentioned Takalani Tshinesa as one lady who had motivated her along her journey. “She is a strong-willed woman who does not hesitate to motivate and encourage fellow women to follow their dreams,” Bumbalicious said. “The first time Takalani met me, she said that she was seeing a talented woman in me, and one who would go places because of her talent and determination.” 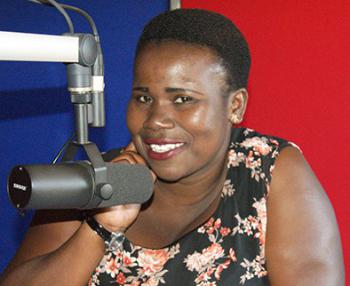