Gospel artist Rhuu Tshikovha released her second album, Your Throne, a fortnight ago.

She was born Rudzani Mudzielwana, who made an impact on the music industry when she released her first album, Madzanga, in 2016.

Tshikovha has been in the gospel music industry since she was young. She has participated in the Clash of Choirs auditions and she was a backing vocalist for many artists.

She also led worship team in her churches, Lighthouse Covenant and Light of the Nations Church.

She started recording in 2014 with a gospel group called Extreme Worship. In 2015, the group did a live DVD recording. She released her first album called Madzanga in 2016. It was produced by the late Dan "Splash" Tshanda.

In 2018 Tshikovha was featured by a gospel group based in Abuja, Nigeria, called The Explicit and together they released a single called Deeper.

After the recording of Madzanga, Rhuu Tshikovha performed in Botswana and several parts of South Africa. Her music is loved as far as Namibia, Botswana, Zimbabwe and the UK. "I am blessed for the opportunity I got just after I recorded my first album, Madzanga. Together with my family Dalom team we were always in and out of different parts of Botswana. I built a good support base that side and I wish to get more opportunity to travel to different part sof the world to bless people with my music,” said Tshikovha

The new single, Your Throne, was made to encourage people to draw closer to God in worship. She believes that music has a bigger role to play in empowering people and uplifting their spirit.

"Your Throne is mainly a song to affirm my relationship with our Lord. It is also to call on gospel music lovers to also focus on the message that artists put in their songs. Life changes for the good by listening to good music, and in this case to gospel music," said Tshikovha.

Your Throne and other Rhuu Tshikovha music can be downloaded from all recognizable Online Platforms such as iTunes, Google Play, Amazon and Spotify. 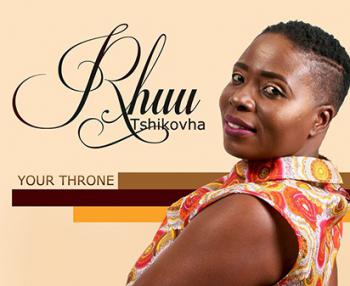