“Write in your own language”

The Department of Sports, Arts and Culture in Limpopo is encouraging young aspirant novel writers to start writing books as part of promoting languages, as it is the responsibility of the department to promote writers and authorship.

The deputy director in the department, Mr Tshifhiwa Netshifhefhe, said they were busy conducting workshops for young aspirant novel writers in the province. “We know that old writers will pass away one day, but who will fill their space? We want to transfer the skills from the experienced writers to the young people, who will be our future writers,” said Netshifhefhe.

He said his department had advertised a literary competition, inviting young aspirant writers to write poetry in their own languages, and the first prize would be R17 000-00. According to Dr Raphalalani, they want young aspirant novel writers to write about challenges that are happening in their communities, some possible solutions to problems and how the solutions could change their lives for the better.

A veteran novel writer, Mr Rudzani Tshianane of Vhutsila Publishers, said they had invited young aspirant novel writers from as far as Masisi, Tshixwadza, Nzhelele, Thengwe, and local writers to be part of the workshop. Tshianane, who has written and published some of the books that are being read by secondary-school learners, said that he had been approached by the provincial department of sports, arts and culture to help in organizing young and aspirant novel writers.

One of the young novel writers who also attended the workshop, Shonisani Nemulodi (15), said that they had received many tips for good novel writing. She recently wrote and published a novel, Ri do tenda nga u vhona. 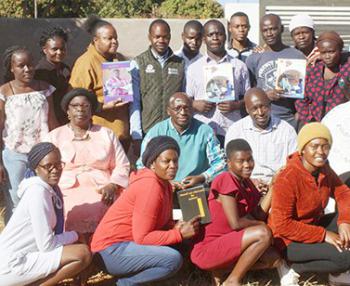 The Deputy Director in the Limpopo Department of Sport, Arts and Culture, Mr Tshifhiwa Netshifhefhe (seated second from left) and veteran Tshivenda novel writer Rudzani Tshianane, photographed with some young aspirant writers after the workshop.