A young singer from Ndindani village in Giyani, Tinyiko Knowledge Chabalala, is all smiles after he was nominated for the Golden Art and Media Awards 2019 in the Best Upcoming Artist category for the song entitled Tour to success.

For this artist, who is known by his stage name – Rejaveration – music has always been the food for his soul, as he puts it. “This nomination only encourages me to work harder,” he said. “Even though I fell in love with music in 2014, music has been part of my life as I listened to it every day.”

This first-year Bachelor-of-Science student at the University of Venda is a hard worker who is passionate about his music and studies. “As much as I celebrate my success as a nominee, I know that I must always put my studies first,” he said.

He has so far released nine singles that all proved to be good to listen to, and this was also attested by the people who listened to them and reported back to him. “People like my music and they always tell me that I am a good and talented singer,” he said. “I managed to do an international collaboration with Netherlands producer Eagleaxe last year on a song entitled Lift it up.”

His music also aims to fight substance abuse and peer pressure in schools and communities. “I keep on going because I am trying by all means to bring change in society with my music by fighting drugs and alcohol abuse through my art,” he said. “I am against the habit of dropping out of school. Without education, it is not easy to operate in this world.” 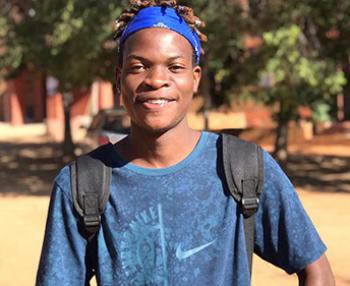 Rejaveration has been nominated for a Best Upcoming Artist award. Photo supplied.