A group of youths from Tshikota location outside Louis Trichardt have found a new way of socialising and keeping themselves off the harsh streets through the art of dancing.

This organisation is called Tshikota Gqom Family and it boasts 35 members who are divided into sub-groups in line with different dance styles.

“I initiated this organisation early this year after I had realised that there was a strong need to bring youths together,” Ratshilaye said. “At first it was not easy, since each one would come with behaviour of their own and we had to align them to the code of conduct in line with our organisation.”

He added that he was happy that he had so far managed to put together so many youths who all respected one another in the organisation. “As youths, we need to stick together and work together,” he said. “It is when we are scattered and not knowing one another that some of us would be accused of inflicting crimes on others, and that's something which we do not wish to witness in our township.”

Ratshilaye is very impressed with the dancing skills and styles which the youths had now gained since the organisation’s inception. “We now have members who possess quality dancing skills and who can compete on a national level,” he said. “We practice from Monday to Saturday, after school.”

At this stage, Tshikota Gqom Family do their daily practices at the grounds of the old clinic, popularly known as the White House. They are requesting members of the community to extend any help to them, so that they can have a practice space (venue) and funding to travel to compete with other groups in other villages and town. 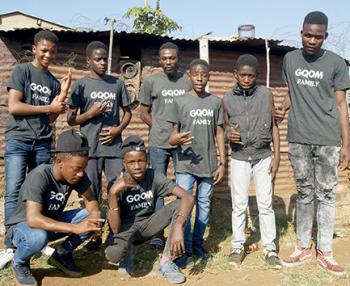 Some members of Tshikota Gqom Family who have enhanced their dancing skills through the months.