Makhadzi (23), who has been prominent in the music industry for the past decade, is releasing a double album. The album is expected to be released before the end of this month. On the album, the songbird, who is arguably regarded as the queen of the dance floor, has collaborated with a couple of artists.

On the first disc she collaborated with Provide, a popular artist from Tembisa. Makhadzi also collaborated with DJ Tira on the song Ndi do Kangwa Venda (I will enjoy my drinks in Venda) on the second disc, as well as with Sho Majosi, King Monada, Master KG and other artists.

All songs were produced by DJ Call Me. “I chose DJ Call Me to produce my songs, because of his experience and knowledge of music,” she added.

On working with Monada, KG and Majosi, Makhadzi said cooperation between local artists was important, so that they could help their musical careers to grow. Explaining how she worked with DJ Tira, Makhadzi said the decision had been influenced by her fans, who urged her on social media to do so. “After many of my fans had urged me to work with DJ Tira, I took the opportunity when I was in Durban last month.

“When I was performing there, I visited him in the studio and showed him the beats that were prepared by DJ Call Me that I wanted to work on. He then said he could not record me before I had sung for him. “I sang for him and he immediately started recording because he was very impressed. Within 20 minutes we were done, and he even said he had never worked with an artist like me before. I just need to hear the lyrics and record automatically once I am in the studio,” said Makhadzi.

Makhadzi said she gained a lot of experience by working with DJ Tira as he had shown her how to produce good music that appealed to the people. Since posting the song she recorded with DJ Tira, Makhadzi said she had gained 10 000 more followers on Instagram and 5 000 more on Twitter. This happened after they posted a piece of their album on social media.

She said her double album, which is expected to be out on 20 September, would be available in all music stores. The album is still to be given a title because of the competition between the songs, which all seem to be hits.

Born and bred at Ha-Mashau Tshivhuyuni, Makhadzi said she was grateful for the support she was getting from her loyal fans. She keeps herself fit by working out in the gym, so that she can stay fit and entertain her fans on stage.

“I am booked the whole of September. This means there is something good that I am doing, and I promise to do better every day,” said Makhadzi.

An excited Makhadzi said that she believed that her fans would enjoy the album and that it would entertain them during the coming festive season. 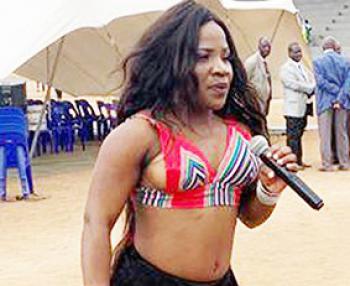