As part of the celebration of the 2019 International Year of Indigenous Languages, as declared by the United Nations, a group of six young, up-and-coming poets have put together an anthology of poems entitled I ndlopfu ya hina.

The title can be literally translated as “It is our elephant”.

I ndlopfu ya hina was published by TP Magaisa Publishers in October 2019.

“The anthology is a call to the Vatsonga to get everyone involved in working towards a better solution to promote and develop our language, Xitsonga, regardless of gender, age and other social divides,” said Hlungwani.

This anthology is clear evidence that the poets had mobilised to address various social problems in their immediate environment. “It covers most, if not all, the challenges of this modern life, such as the significance of education, issues of politics, divorce, and issues of leadership,” he said. “We need to make it fashionable to write in our own language.”

The authors employ strategies that help in creating mental pictures, such as metaphors, similes, sarcasm, personification and hyperbole. “Again, the authors use the standardised words and the new spelling and orthography rules recommended by the Pan South African Language Board (PanSALB) in line with Xitsonga,” he said.

Another poet, Javulani Collen Chauke, said: “Our core aim as poets is very explicit. Let's encourage the culture of reading, developing and preserving our indigenous languages, because they describe who we are as a people.”

Publisher Themba Patrick Magaisa, well known as TP Magaisa in his writings, said that the anthology was a must-have for all those who wanted to enjoy the richness of the Xitsonga language. “This anthology is one of the best publications that I am continuing to issue for and by young authors,” he said. “The future looks bright to all the poets who contributed to this anthology.” 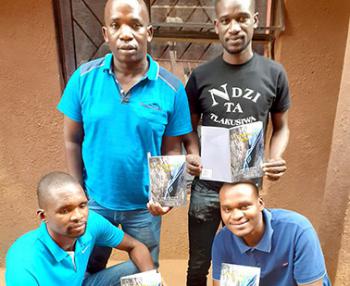 In the picture are (from left to right, at the back) are Msengi Patrick Khosa and Vongani Landro Mathebula. Front: Miyelani Anthonia Hlungwani and Javulani Collen Chauke. Photo supplied.