Mpho copes with hardship through his art

In 2009, Mpho Lihaiwa’s mother passed away and he was flung into a period of mourning, which was accompanied by “thinking too much and crying a lot”.

“Family members were there to console me throughout the mourning phase, but that was not enough,” he said. “There was a void that neither earthly wisdom nor a human being could fill in my life. I felt so empty in my heart.”

This Grade 11 pupil at Litshovhu Secondary School started spending most of his free time toying with a blank page and pencil. “When I sat down and started to draw, I felt a peace of mind that I had never felt before in my life,” he said. “This peacefulness was deep, and it was like I could lay my finger on it.”

Mpho’s talent as an artist gained momentum, so that he was presented with a certificate of recognition by the Department of Economic Development, Environment and Tourism during the department's World Environment Day event that was held at Schoemansdal Environmental Education Centre.

“It was a great moment in my life as an artist, and it assured me that my art was not only good to me but that other people could still notice and celebrate its worth,” he said. “I wonder where I would have been today had I not discovered art – or should I say that art discovered me?”

Today, Mpho is trying to live up to his own expectations and he draws portraits using pencil and paints any imaginable creature on earth with his brush and paint. He also draws amazing standard house plans. “Art means a way of life for me,” he said. “I found the meaning of life in art; therefore, to me, art is cathartic.”

He thanked his guardian and grandmother, Vho-Mokgadi Lihaiwa, and his aunt, Vho-Stella Lihaiwa, for the continued support in his art. “They encouraged me never to lose focus on my studies while they also urged me to take my art seriously,” he said. 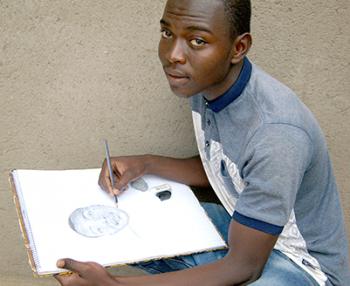 Mpho Lihaiwa is working on a self-portrait.