The year 2019 will go down as the best year for young Vhembe gospel artist Lufuno Phalanndwa.

At the awards ceremony, which was held at Sun Meropa Casino Hotel in Polokwane, the 26-year-old Lufuno scooped the Best Gospel Newcomer of the year award and the coveted Best Gospel Male artist of the year. Lufuno’s album, Midnight Hour Worship, was nominated 10 times in 2019 only.

Lufuno, who was clearly lost for words, directed his gratitude to all his supporters who voted for him to clinch the Best Male Artist gong. He said gospel music was not for the artist, but for the people listening to it.

“I sing to worship and praise God, I sing so that people can know about God and get saved,” said Lufuno. “It is an honour for me to have won three awards with my debut album. All thanks to the Almighty for trusting me with a gift of worship.”

The December holidays will be very tough for Lufuno, who is expected to juggle between his professional job as a diesel mechanic and honouring gigs. His manager, Robert Netshiunda, said Lufuno’s schedule had been designed in a manner that he would not have to choose between the two.

“We are grooming him to be a true professional, so we manage his schedule to minimise the risks,” Netshiunda said. “His job comes first and if a gig clashes with his work, unfortunately we turn it down. Unemployment is rife in our country and we do not want him to focus on fame and lose track of what matters most.”

Another Vhembe artist, Minister Lombard Matshinge, also won two awards on the night - that of Best Worship Song and Artist of the year. Songstress Newie Nthabalala took home the Song of the Year award, whilst King D Music took home the Best Album of the Year accolade. 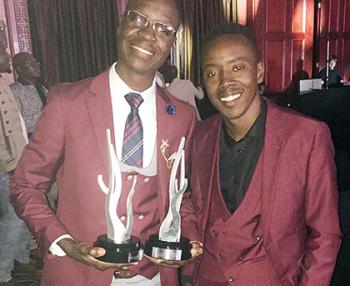