Scourge of gender-based violence tackled through a true story

After experiencing the effects of gender-based violence in his family and childhood upbringing, Tiyiselani wa Bevhula (34) decided to share his experiences through a fictional novel, entitled Trapped in love and trash.

He witnessed how his father’s violent behaviour towards his mother and siblings almost ruined his life and those of his siblings. He says Trapped in love and trash is a book that aims to fight the scourge of gender-based violence, sexual abuse and other societal ills.

“The recurring public discourse in our society is that ‘men are trash’ and the book outlines the root causes of gender-based violence in a fictional way,” Tiyiselani said. “The book challenges all members of society and different stakeholders to act and fight women abuse before it ravages our respective communities.”

Trapped in love and trash is a story of love, suffering, betrayal, abuse and the makings of 'trash' and its effects on families as building units of society. The narrative follows the life of a young boy who witnesses his father abusing his mother and siblings until he sees it as normal. While growing up, he starts to practise what he has seen in the house on his girlfriend until she feels trapped in love and trash.

“The book serves as a clarion call to embark on a journey to fight and win the war against gender-based violence, women and children abuse in line with #16Days of activism,” says the author.

Tiyiselani was inspired to write the book by what happened in his childhood and after losing his brother to a domestic-violence-related death.

Tiyiselani is a media studies graduate who worked as a media analyst, writer, and editor in different media outlets. He is an expert in public relations, digital marketing and promotions. He is the founder and managing director of Bevhula Media. His love of writing was fuelled by the need to create a knowledgeable society. He has written extensive opinion pieces for leading newspapers and magazines in South Africa.

Trapped in love and trash costs R170 and is available from good book shops or directly from the author.

Tiyiselani is available on Facebook and those interested in his book can reach him on 076 019 5951 or at tiyiselanimathe@gmail.com. 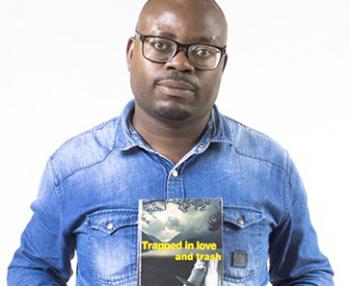 Tiyiselani wa Bevhula decided to share his experiences through a fictional novel entitled Trapped in love and trash.