Just two months after its release, Wilson Dzebu’s Tshivenda traditional reggae album, Vhulunga Zwau, surprised many when it scooped the 2019 Best Traditional Artist of the Year Award during the Front Seat Recognition Awards that were recently held at Thohoyandou Indoor Sports Centre.

The annual awards are the brainchild of well-known comedian Livhuwani Madadzhe.

Known as Ras Willie, Dzebu said it was also a surprise for him to have been nominated and then winning the award. “I know that the album is doing very well, but I did not expect it to win an award so soon. I was surprised by the huge support from music lovers, and many people told me that my music is unique because it is a new reggae beat that is deeply rooted in African culture and tradition.”

He said the fact that he was competing with some of the heavyweights in the music industry and came out tops was a clear indication that the future looked very bright. “Truly speaking, I never thought I would make it as some of the nominees have big names and have been in the music industry for decades. I nearly froze when my name was called out to ascend the stage to take the award. This was indeed the greatest moment of my life.”

Ras Willie said nothing was more fulfilling than being honoured by his own people. “When it starts here at home, there is hope that more is still to come soon. It would have been not fair for me if I first get an honour far away before I get a recognition from my own people.  If I die now, I will die a happy man because my people have given me the happiness that I will never forget until my last day on earth.”

Awards organizer Livhuwani Madadzhe said the main aim of the initiative was to uplift local artists and encourage them to take their art seriously. “We have many gifted artists, but they are being ignored by the so-called big institutions. Our duty is to make sure that these artists are promoted and given the opportunity to shine through their God-given talents.” 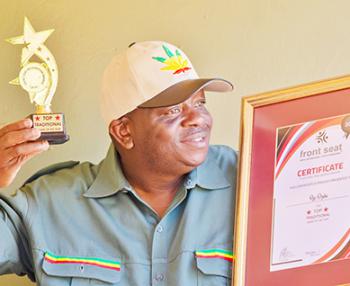