A resident of Mavambe village near Malamulele, Percy Marule, is on the right track as artist and his talent has not only earned him a name, but bread as well.

He discovered art when he was at primary school many years ago. After producing some earlier works that earned him respect among those who saw his work, Marule is currently based in Vuwani where he is continuing to mesmerise hundreds of people with his art.

He emphasised that his love of art largely developed at home. “I loved art from a young age,” he said. “My father always drew house plans that inspired me. Even in the house where I grew up, we had paintings on the walls; these also inspired me to paint.”

“At the moment, I have never been on any national art market, but I have plenty of successful commissioned artworks that have been bought,” he said with a chuckle. “Maybe I am on the national level because there are people who commission me from different parts of the country. I am open to new art commissions.”

For Marule, art is expression and creation, and the two cannot be separated. “Anything created is art, yet my type of art is creative art,” he said. “It is a fusion of imagination, media, time and expression that results in a creation.”

His artworks carry distinctive human identities and celebrate humanity. In his words, speaking philosophically, he said: “The message could be ‘love yourself’ or ‘one love’.

“My greatest highlights are making a ‘song cover’ for Percy Mukwevho, painting the school emblem of E.P.P Mhinga High School at the entrance of the school, painting four artworks for Papa Penny and shooting with him on his reality TV show and also painting and commissioning with international soccer player Dino Ndlovu,” he said.

He said that art was a mystery and that anyone who wished to partake in this creative, imaginary journey must be willing and prepared for great frustrations and disappointments. “After all, never give up,” he said. “Artistic dreams do come true.” 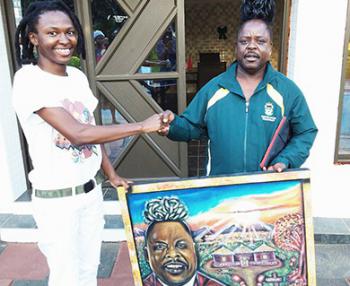