Rasta Bathu teams up with his childhood hero, Shufflers

Many young reggae artists have dreams of performing alongside award-winning icon Shufflers Ragimana, but when the opportunity came for Tshedza Mudau, he grabbed it with both hands.

“Featuring this reggae music guru on my album is a dream come true. It was such an honour to get the opportunity to work with him. As a young artist, I have learnt a lot from this collaboration which has helped me in my musical growth. I have just realized that we easily connect musically, and people are impressed by our collaboration,” says Mudau, of Matangari village near Makonde.

Famously known as Rasta Bathu in the music industry, Mudau featured Shufflers Ragimana on his second album, entitled Minwe a i lingani that was released last month (August). In the song Tshidivhano, Rasta Bathu and Ragimana sing against nepotism and corrupt activities that are happening daily both in the private and public sector. “Nepotism and corruption have a negative impact in our country, especially on the poorest of the poor. It was important for us to add our voice to this war against these bad practices. The best way to do it was through music – a medium which can reach many people in a short space of time.”

At the tender age of 21, the future looks bright for Rasta Bathu. His first album, Neighbour, was released in 2018. Despite its modesty, Neigbour dominated airplay on regional and national radio airwaves, much to the surprise of seasonal artists. His 30-minute interview on Phalaphala FM’s reggae programme earlier this year was a grand entrance to the local reggae scene, and many people never stopped talking about him.

He says his second album is a tribute to his late father and teacher, Humbulani Anglo Mudau. “My father loved reggae music wholeheartedly and it is a pity that he passed on without seeing my musical talent and achievements. I have no doubt that playing reggae music is the best tribute I can offer to him. I believe that his spirit is happy about my progress in music.”

Because of the lockdown regulations, Rasta Bathu sells his music in hard copy. He is available on WhatsApp at 0829356444. 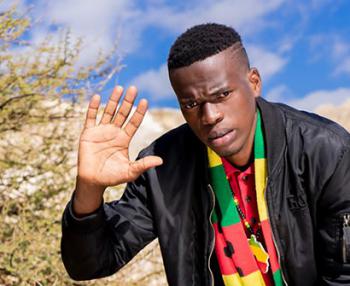 At the tender age of 21, Tshedza Mudau, aka Rasta Bathu, is making his presence felt in the reggae music fraternity. Photo supplied.