Her love of reading stories has driven one young lady to pen a sterling novel, entitled Muloro a u Dzami, which revolves around the idea that dreams do come true if they are pursued.

Angel Mudzwiri, a resident at Tshirolwe Extension 3, said that she had seriously started reading fiction when she was a pupil at Tshirolwe Primary School. “As I grew up, and with my mind maturing, I started putting my story ideas on page and shared them around with friends, who all motivated me to keep on writing, because they could see the characters and environs that I was depicting in my narrations vividly,” she said.

When she reached Jonathan Mushaathama Secondary School, she met educators who, upon seeing and reading her scripts, agreed that she possessed a great literary talent that needed nourishing.  “At the end of the day, I managed to write a novel entitled Muloro a u Dzami.”

The novel depicts the story of a young woman named Lufuno, who encounters many problems and hurdles because of bad friends. Lufuno eventually defeats the adversities and studies to become a medical doctor. “What I love most about Lufuno is that she is not vengeful, for upon graduating, she still went to work in the same community where people had abused her, now helping them as well,” Angel said.

Meanwhile, Angel is excited about the fact that her dream of telling a good story and having it published in book format has come true. “It had taken me at least two years to write Muloro a u Dzami, and I am really happy about the result,” she said. “I encourage other fellow youths to follow their dreams.”

Mr Nndavheleseni Thomas Mudau, principal at Jonathan Mushaathama Secondary School, said that Angel's talent started at an earlier stage, in Grade 10, when she approached him and told him that she needed to be assisted because she wanted to write a book. “I then realised that there’s much talent in her and referred her to people who could help her,” he said. 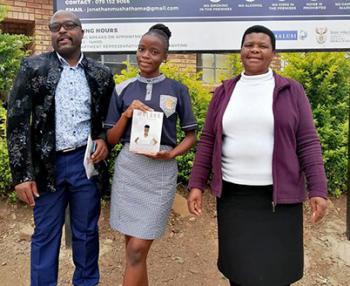