Salim Sgo is a DJ of many talents

Salim Banda, popularly known as Salim Sgo in the entertainment fraternity, is a creative and versatile urban radio presenter and a DJ who can tackle just about every language in SA and a few African languages. His radio journey started at his hometown of Musina in 2009 where he was placed as weekend evening presenter for the Party Time shows on Musina FM.

Only six months into his radio career he was moved to the prime-time show, the station’s afternoon drive, which he coordinated and renamed to what is known today as Kasi104Drive.

He fine-tuned his skills at Musina FM for three years until 2012, when he got an opportunity to join Univen FM. Thereafter he had a stint with Choice FM in 2017 before he found a home at Vhembe FM, where he currently presents the weekend afternoon drive show, called Rodigeda, between 15:00 and 18:00.

Apart from being a household name in the broadcasting industry, Salim Sgo is among the most experienced DJs on the house-music scene, having been active in the industry for the past 13 years.

Salim Sgo sends his sincere gratitude to the legendary DJ Mjukeit of Musina, who mentored him. “Coming onto the scene as a clueless and obsessed music lover, I needed the right mentor to guide me into one of the trickiest and most complex industries. Mjukeit told me that, as a DJ, I should not be known by partygoers only. Instead, I should also consider radio to be relevant across all ages. Since then, I have never looked back.”

A well-travelled DJ in and out of the country, Sgo has performed and won hearts of music lovers at major events in areas such as Musina, Thohoyandou, Mokopane, Mpumalanga, Pretoria, Pietermaritzburg, and Zimbabwe, to name but a few. He is also a resident DJ at News Café Thohoyandou.

He wants to mentor and offer free training and advice to budding radio presenters and DJs who are serious about making it in the entertainment industry. Those interested should engage him on his social-media pages – Twitter: @salim_sgo. Instagram: @salim_sgo. Facebook: Salim Sgo and SoundCloud: @salim_sgo. 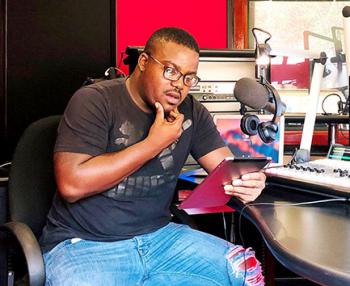 Salim Sgo is a well-travelled and experienced radio presenter and DJ who wants to share his skills with aspiring young talent. Photo supplied.