Richy Muavha lets her guitar do the talking

Ritshidze “Richy” Muavha’s musical journey started at a young age as she used to sing at home and in the church band.

She was inspired by musicians such as Oliver Mtukuzi and Rihanna. She grew up listening to reggae, Afro Jazz, RnB and pop music. However, she kick-started her singing career in 2017, and she went on to get a national recognition as a guitarist earlier in 2019.

“As a guitarist, I drew my inspiration from my father who used to be part of his independent band,” she said. “I grew up in a home that was filled with musical instruments, and that had fuelled my passion for music. As a child, my favourite instrument was a guitar, as well as a microphone.”

The sad part of Richy’s life that later made her a strong woman is that her father was involved in a minor accident in which he sustained a head injury, to the point where he couldn't remember how to strum the guitar strings anymore.

“After some years, I wanted to jog my father’s memory of playing a guitar, and to achieve that, I bought a classical guitar from the little bit of extra cash that I had,” she said. “I would play my dad his favourite songs now and then.”

A sad episode in her life gave her more strength. She was hospitalised for six full months after an incident in which a bowl of hot water had accidentally splashed onto the right side of her face and shoulder.

“What got me through those darkest months was my love for singing,” she said. At that stage, she had just endured her parents’ separation. “I would also sing for other kids in the hospital wards, and that’s why, even today, I love to spend my time with kids.”

She recalled that during one of her visits to her father’s place, she started playing her guitar as a way of making him happy. “I vividly remember how I visited my father just to play him some gems, and how he got lively and picked up his old guitar (which had only three strings left on it by then) and strummed along,” she said. “That was the most memorable moment of my life.”

Richy had so far released some hard-hitting songs that, among others, include Our Favourite Song (ft Razie Kay). She is currently signed under Rita Dee Entertainment, and she is working on her EP. Her dream is to perform on an international stage with a live band.

The 22-year-old artist from Tshivhulana village in the Vuwani area is a BA student (Criminology and Psychology) at the University of Limpopo's Turfloop Campus. Readers can have a sample of her music on https://youtu.be/gNzxXYuezS8. 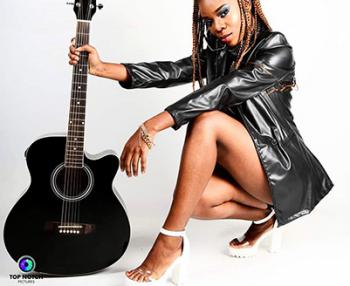