The name Gundo Nemukula might sound new to the entertainment industry, particularly on the contemporary gospel scene, but like dynamite that comes in small packages, the new kid on the block will definitely make her presence felt when she officially launches her debut album, entitled Lockdown but not knocked down, next weekend (7 November). The long-awaited launch will take place at the Fountain of Living Waters Christian Centre, at Thengwe Matshetshete village.

Though this is her first album, Gundo is not a novice in the music industry. In church circles, congregants call her the sweet-voiced lady, because of her exceptional singing talent. For the past years, she has been active in the church’s worship team and worked with various local gospel stars to sharpen her artistic skills. Her envisaged album, which is expected to cause havoc in the local gospel fraternity, is a mixture of praise, worship, and dance songs.

She said she decided to name the album Lockdown but not knocked down because most of the work was done during the period of the lockdown, following the outbreak of the coronavirus pandemic.

Her husband and manager, Fhatuwani Nemukula, said resources were invested in the album to make sure that it matched the standard of other veteran gospel artists already in the field of music. “The saying that first impressions count, is very true. We have to enter this field aggressively because music lovers are waiting for something new that they have never heard before. We have worked hard to make sure that this first album becomes a brand that will definitely turn the tables upside down in the gospel music fraternity. This time, we are ready to conquer because we have a golden crown waiting for us in this tough music industry.”

He said that, so far, they had not distributed any music to give the launch the dignity it deserved. “Music lovers will hear this album for the first time during the day of the launch. We felt that it would be unfair to launch something that is already in the public domain. We want to arouse interest for our guests because we will be giving them something new and unique. We are happy because even Psalmist Takie Ndou has confirmed to perform in support of the launch. The 10-track album to be launched contains the songs Vuwa u penye, Gundo, Nga malofha, Vha Murena wa marena, U mukhethwa, Vhonani Murena, U hone Muimeleli, God’s love, Worthy is the lamp and U Inkosi.”

The music will be available in all major online digital stores immediately after the launch. More information about the album launch can be obtained from Fhatuwani at 062 745 4376. 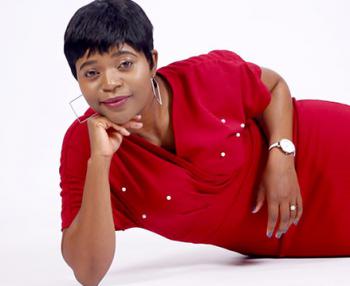 Gospel debutante Gundo Nemukula will launch her long-awaited debut album, Lockdown but not knocked down, at Thengwe Matshetshete on Saturday, 7 November.  Photo supplied.