Learner writes book on the importance of prayer

A Grade 11 pupil of the Tshivhase Secondary School in Vhufuli village has just published his very own book on the importance of prayer.

Pfano Castro Masimbane told Limpopo Mirror that his book, Rock of Prayer, emphasised the need to have a spiritual connection with God through constant prayer and contained ten answered questions regarding prayer.

“I am of the opinion that all people must lead a prayerful lifestyle, so that they are able to get connected to God at all times,” he said. “When I was writing this book, I had both young and old individuals in mind, because I believe all of us aspire to grow in Christ, or to have a relationship with God.”

His journey started from a different direction, which initially had nothing to do with writing, but had somehow led him into writing the book. “There was a time when I would share the word of God with fellow learners at school,” he said. “That sharing of the Word became a lifestyle to me, and as long as the school environment allowed it, I continued doing it. But when school closed for the December holidays, I had no one to share the Word of God with.”

He consequently started preaching the Word to himself. However, at some stage he realised that that was not enough, because he wanted this life-uplifting message that he was preaching to himself to reach his fellow human beings as well. “I thought it would be better if I wrote a book based on those messages, so that other people could access the positive messages of life,” he said.

The young author said this would not be his last book. He intends to write more books and get them published. “I still wish to publish more books that will change people's lives out there,” he said. As this book falls within the Christian literature genre, he said he aimed to win more souls for Christ, and also to inspire young and old people to grow spiritually.

He has already set up a small company, Oxygen Creative Studios, where he designs flyers, logos and event posters. He aims to also document his book in audio format, so that it could be made available as an audio book. He further runs Verbond Still Water, where he purifies water and sells it to members of the public.

“I think I am a good example among youths that it is possible to work hard and achieve success even at a younger age,” he said.

Pfano financed the publication of his book, which sells at R120 per copy and is available directly from the author at 071 373 7296 (calls and WhatsApp), or he can be emailed at masimbanepc@gmail.com.) He is also on Facebook (Masimbane Pfano Castro) and Instagram (castro_masimbane_pfano). 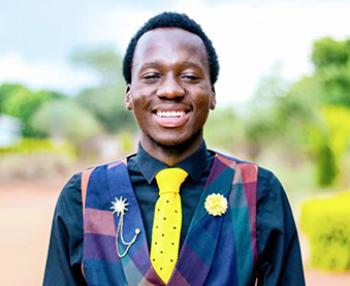 Pfano Castro Masimbane has published a book that emphasises the need to have a spiritual connection to God through constant prayer. Picture supplied.