What happened to Ntshenge and the Jah Live?

Where are Ntshenge and the Jah Live? This is the question many music lovers are asking themselves after the famous reggae music sensation vanished into thin air more than 10 years ago.

The group shot into stardom in 1999 when they released their debut album, entitled Legalized Crime. The celebrated album featured the hit song Tsho nnambatela, which resembled a national anthem, judged by its popularity then. The group then released their second album, Cornerstone, in 2006. Cornerstone featured hits such as Vhudobadoba and Tough on me, which did very well in the South African and international reggae music fraternity. Since then, not much news has come to the fore about this musical group.

In an exclusive interview with Limpopo Mirror, the group leader, Ntshengedzeni Nthungeni from Ha-Begwa village outside Thohoyandou, confirmed that he was still alive, healthy and kicking. He said over the years it had been difficult for him to forsake the music industry, because he had been born to prophesise through music.

The music genius is currently working on five songs in remembrance of his deceased reggae colleague, Jahman Chiganja. “The project that I am currently working on is very complicated and it needs a lot of time and hard work. Jahman Chiganja produced a demo before he passed on. I have managed to extract his voice from the five dummy songs and I’m playing live instruments over the vocals. The project becomes more complicated, because under normal circumstances we start by playing instruments before we sing. But here, the vocals are already there and we have to make sure that they fit well with the instruments. This means that although he is no longer alive, Jahman Chiganja will be singing on all the five songs that will be released under his name. Taking into consideration that there is a lot of work to be done, the release can take longer, but we urge music lovers to be patient. We want to release good music and people should give us time to come up with a more mature product.”

Besides working on Jahman Chiganja’s five songs, Nthungeni says he was also working on his comeback album, which was still in the early stages of production. “Watch the space. Ntshenge and the Jah Live will be back very soon. We are working on something that will surprise the world because we play international music. The prophets of doom who think we are down and out should think twice. We are going to reclaim our top spot and our fans will be happy again to see us dominating the music charts across the globe. Because of the huge public demand, we have opened up for live public performances. Anyone who would like to book us can directly contact me on my mobile number 072 848 5868.” 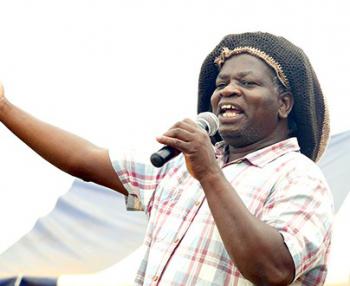 The leader of the famous reggae music group, Ntshenge Nthungeni, says they are ready to reclaim their fame on the international music scene.