“You can use your talent to improve the lives of those who are less privileged.” This is the message from reggae music legends Kenny Wailer Murabi and Colbert Mukwevho.

This call comes after these musical geniuses jointly released a two-track album, entitled Down but not out, of which all the sales’ proceeds are being channelled into the Disaster Relief Fund. The Disaster Relief Fund is a fund that was established to help in the stabilisation and recovery needs of people affected by catastrophic events.

The two reggae superstars do not need any introduction in the national and international music industry. Both have a huge fan-base and fill their venues to capacity whenever they perform. Their music is celebrated both inside and outside the borders of South Africa and these two have no time to rest, as they are currently on a tour to promote their album across the country.

The two-track album, which is available in all major online stores, is the brainchild of one of the major role players in the South African recording industry, Adziambei Music Academy. The academy could not resist collaborating with the two great reggae men, as they are both legends in their own right. The songs on the album are the title track itself, Down but not out, and Cry no more.  Down but not out is already dominating the reggae music scene, receiving massive airplay on both regional and national radio stations. The track encourages people to love and help one another during this time of need.

Murabi says it has always been his wish to collaborate with Colbert Mukwevho because they relate so well musically. “We decided to use this opportunity to raise awareness about the power of giving. That is why we are not collecting a single cent from the sales of the album. The sales of the album are skyrocketing, and we are happy that our cause for helping the less privileged is bearing fruits. We don’t have silver and gold, but we have contributed with our music to help those who cannot do anything for themselves. We call upon other artists to follow suit because, even when they do not contribute the actual cash, they can do so by giving their music proceeds to those who are less privileged.”

He says pressure from the fans has forced him to work on a full album with Mukwevho. “This collaboration has touched many music lovers and we are finalising plans to release a full album in the near future. If people want music, ours is to do nothing else but to give them what they want.” 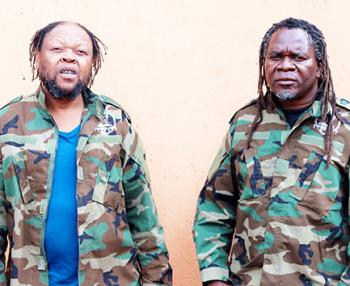 Reggae music legends Colbert Mukwevho (left) and Kenny Wailer Murabi have released a two-track album entitled Down but not out, whose proceeds are channelled into the Disaster Relief Fund. Photo: Ndoweni Malala / Adziambei Music Academy.