A resident at Tshandama village, 69-year-old Khole Johanah Nndwambi, is an artist who keeps Tshivenda music alive with her lugube and lyrics.

Her music leans heavily on the lugube, a solo, traditional, key-like instrument, consisting of a wooden board with attached, staggered metal tines that are plucked to produce sound. In former days this was traditionally played for self-entertainment. However, Nndwambi has been entertaining people with it for decades during birthday parties, weddings, and other social events.

“I discovered the magical sounds of the lugube at the age of 15. I could play the lugube with the prowess of a master,” she said. “I would see people sitting or standing and I would go over and sing for them. I had come to realise that people were happy with my performance.”

For Nndwambi, who is always in contact with young people and gathers them together to tell them zwidade or folklore, music is something that can guide and lead youngsters to a good way of living.

“Music can make our girls refrain from getting involved in acts that lead to teenage pregnancies,” she said. “Music can make you to not hurt the next person, because music is love. Those young men who are killing their lovers may not do this if they listen to music. Music can stop violence.”

She said she was mentored by the late poet-par-excellence, Vho-Makhadzi Tshinanga, who would recite the names of all the Venda clans and regions without referring to any prepared pamphlet. “I am still motivated by the poetry of Vho-Makhadzi Tshinanga,” she said. “Another artist who inspired me was the late Vho-Tshivhangwaho Raedani of the Adziambei Band. He composed the kind of music that was real and related to our lives.”

The highlight of Nndwambi’s life was when she was called by the late former state president, Nelson Mandela, to sing for him while he was walking through the streets of Soweto, shortly after the first democratic elections in 1994. “I also sang for President Cyril Ramaphosa at some stage,” she said.

She called for the youth of South Africa to be proud of their culture and their mother tongue. “To all the men out there, please stop abusing us and stop killing us,” she said. “Learn to love us.” 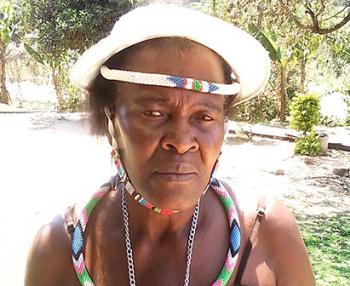