“This is really surprising! God has his own way of doing things and ours is to give thanks and praise,” said a proud father, Maanda Ndou of Tshikuwi village in the Nzhelele area. Maanda is the father of Denzhe Ndou (21), a gifted, intelligent girl who suffers from autism (a serious developmental disorder that impairs the ability to communicate and interact). But, amazingly, the “bright angel” sings fluently, and she has just recorded a single titled Fulufhelo, which is due for release at the end of this month (March).

The director of Masana Records, King Da Vic Nemungadi, said this was the first time in his 30-year music career that he had the opportunity to work with a person who suffered from autism. Denzhe is recording her music at his studio in Gauteng.

“This is very amazing. Denzhe has difficulty in speaking, but when she sings, her amazing voice creates wonders. When I speak to her in the studio, she does not answer, but she will perfectly do what I have asked her to do. This is a miracle, and I believe that God wants to prove a point that He can make impossible things possible.”

Nemungadi said that, at first, he had thought working with Denzhe would be difficult because of her condition. “It turned out to be an enjoyable session when I realized that she hears and understands what I say. I could not believe that it was the Denzhe I know when she does her miracles behind the microphone. Her golden voice is something that all gospel music lovers should be proud of. She will definitely shake the South African gospel music industry, because she has a beautiful, unique voice that will work to her advantage. Her song will be released through Masana Records at the end of this month (March) and it will be available in all digital music stores.”

Denzhe’s father, Maanda Ndou, said that he had realized his daughter battled to communicate when she was only a year old. “We initially thought she was taking long to communicate, but after taking her to various doctors, it was confirmed that she suffers from autism. She is currently attending a local special school, so that she can be independent and do things on her own.”

Asked how his daughter had ventured into music Ndou said: “At one time she had a problem with her hands and doctors advised that she had to get something that would keep her hands busy. I then decided to buy her a keyboard, and she fell in love with it. After a few weeks, she was so perfect in playing the keyboard that one could even think that she went for formal music lessons. We were all surprised when she started singing and the voice was more beautiful than I ever imagined. We then decided to take her to the studio and the rest is now history.”

Ndou encouraged other parents with children suffering from other conditions not to give up. “God gave us these special children for a reason. Love them unconditionally and give them your full support while exploring their talents to the fullest. Denzhe is my special angel, and I thank God for giving me this beautiful gift. I love her wholeheartedly and she means everything to me.” 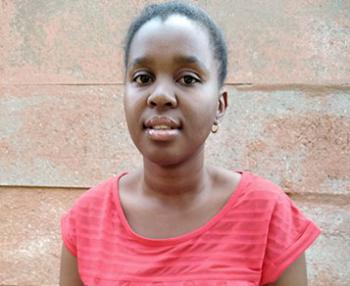 Despite suffering from autism, the brilliant, young and beautiful Denzhe Ndou is a vibrant gospel music star who will be releasing her debut single, Fulufhelo, at the end of this month. Photo supplied.