Ndivhuho's dreams are paying his bills

When Ndivhuho Nemutandani (24) fell sick and started having strange dreams, he never guessed that his ancestors might be calling on him to do great things with his life.

Ndivhuho, who resides at Tshisahulu outside Thohoyandou, quit his schooling in 2017 when he was in the 11th grade after he started having fainting spells and dreams consisting of strange and fascinating images. He consulted doctors, but they could not find the reason for his ailment. At first, he resisted this ‘calling’ from what he believes to be his ancestors leading him onto a new path, but one day he decided to re-create these images from his dreams.

His first creation was a sculpture of his own dog, and the final result motivated him to continue. He then continued to create beautiful sculptures and other forms of art from the images that came to him in his dreams - from water features to unique flowerpots.

“When I dropped out of school, I thought my future was gone forever, not realising that my ancestors had other plans for me. Since I started to follow my dreams, I am healed of my ailment and now I can make any form of art that appears in my dreams,” he said.

Today, Ndivhuho does not regret the lapses he experienced, as they turned out to be the source of his livelihood as an artist who is fast becoming a household name across Limpopo.

“I never had any formal art training, only the dreams. They become a reality, and with this I am able to pay my bills. My dreams are now my employer, and I can’t ask for more. I am also very grateful for the support I get from the community,” he said.

Among his creations is a statue of President Cyril Ramaphosa, which Ndivhuho wants to give to him personally. 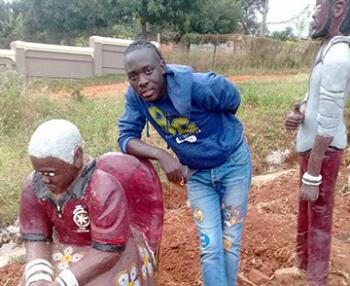