Look out for ThaGreatwhite's latest album

Romeo “ThaGreatwhite” Dzedzemane is indisputably one of the brightest shining stars in local music circles at the moment.

Describing himself as a perfectionist, he tries to make sure that his melodies, voice, and lyrics blend harmoniously to pierce deeply into the hearts of his fans.

“I have been making music professionally since 2014 as an independent artist,” he said. “Working with producers such as Big Ropza, Karvilbeatz and Adroitbeatz, I did a few projects.” These projects include The Milestone Compilation, Ground Zero Mixtape, Elevate Ep, 1201 Ep, and Love & Prayer Ep.

“My work ethic has had many rewards, like big show performances and such,” he said. “I managed to perform at the Royal Gardens Music Festival’s pre-party in 2016, on the same festival’s main stage in 2018 and 2019, and in an episode of the TV soapy, 7de Laan on Human Rights Day in 2019.”

The love that he gets from his fans motivates him to give his very best. “Their support is an excessively big factor as to why I keep making music,” he said. “My fans are amazing and the love they show me every day is unmatched. The fact that fans start from my partner, my family and the rest of the world is so amazing; there is nothing worse when the people closest to you don’t support your dreams.”

His creativity is nourished by everyday life. “Everyday situations inspire my music, and lately I’ve been getting great inspiration from our Venda legends too,” he said. “Every song I’ve ever made has my soul in it.”

R.A.D. Farewell (featuring Riah) and his hit single, ThaGreat, are two of his songs that hold a lot of meaning to him. “Earlier this year, I lost one of the most important people in my life - a man who was bigger than life to me, and that pain on its own led me to do this song,” he said. “It is a farewell song dedicated to him – my dad – and the love that was in him and given to others. The song had massive response on YouTube. I guess many people can relate to my story.”

ThaGreat will be released on Romeo’s birthday - 3 August - and his much-awaited 14-track full-length album on 3 September this year. “The album is beautiful. It has everything, from love songs, dance- and club tunes to songs that speak to the soul and a lot more,” he said. “It took me two years to complete this album, and all I can say is that my fans will be satisfied with the end result. I am excited on their behalf.” 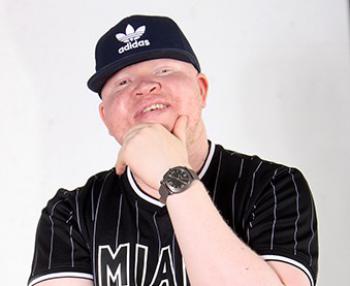 Romeo “ThaGreatwhite” Dzedzemane is indisputably one of the current shining stars. Picture supplied.