“Your weekends will never be the same again.” This is the promise made by Makhado FM’s new radio presenter, Vuledzani Vincent Mbedzi, to the listeners.

Mbedzi worked as radio presenter for Musina FM for three years, where he was popularly known as Vsquared. After the station closed down because of cable theft and other issues in August this year, Mbedzi seized the opportunity to take on a part-time position as presenter for Makhado FM. Now he has been appointed to the Weekend Connection show, which is aired from 02:00 to 06:00 on Saturdays and Sundays. Listeners are treated to some good House and Rhumba music.

“I am bringing only the best music to ensure our listeners enjoy the programme and call out for more,” Mbedzi promised.

Mbedzi is from a previously disadvantaged family. After completing his matric in 2009, he could not further his studies because of financial problems. He started his career by recording himself on a cellphone and playing it back until he was satisfied that his voice and presentation sounded good. After several recordings, Mbedzi tried his luck with Musina FM, and got himself a job as radio presenter.

His passion for the radio stemmed from listening to Phalaphala FM’s morning drive presenter, Jones Netshipise. 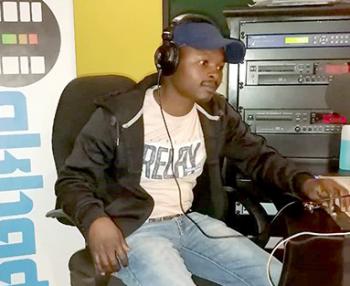 Vuledzani Vincent Mbedzi from Makhado FM hosts the Weekend Connection show, aired from 02:00 to 06:00 on Saturdays and Sundays. Photo supplied.