Local socialite Hendrik “Mr Doritos” Makuya has become the latest trend on social media. His hilarious sense of humour and funny videos that he posts on Facebook have earned him a bit of ‘celebrity’ status.

Adored for his usual sayings, such as A hu na munna Venda (I’m the only real man in Venda) and Thi zwi funi zwa u gudiswa vhutshilo (I don’t like to be taught how to live my life), Makuya shoots most of his videos live from the bushes while he enjoys Doritos snacks with his dogs and goats (hence the nickname). Last week, the Doritos Facebook page posted his picture and thanked him for being such a die-hard fan of their product. The post received more than 3 500 comments with more than 3 800 shares.

Makuya has garnered more than 70 000 followers on his Facebook page in less than three months.

He hails from the dusty rural area of Ha-Makuya near Masisi.  With his trademark red jacket, Makuya has become a familiar face at social gatherings around Limpopo and Gauteng. At most of the events, he is booked just to grace the occasion, while other socialites take their pictures with him.

When he received a gift in recognition of his popularity in the entertainment world, Makuya was heartily pleased. The gift was from prolific self-taught drawing artist Khathutshelo Ndou from Tshisahulu, who presented a portrait of Makuya, his goat Smoli, his dog Jaguar, his cow Mutodzi, and the ever-present pack of Doritos.

“Makuya rose from scratch while many people were ignoring him at first, but he never gave up on his dreams, and today he is one of the most famous socialites from our area. I dedicated the whole day to work on the drawing because I want to encourage other young men to live honest lives and not to give up on their dreams,” Ndou said.

Makuya said he was honoured to receive such a valuable gift. “I never thought there were people like Ndou who were watching every positive step in my life. The drawing means a lot to me, and I will cherish it for the rest of my life.” 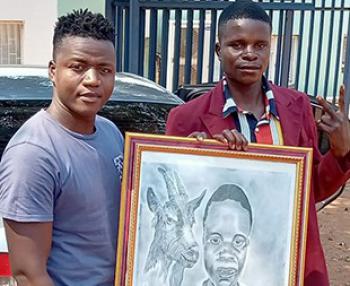