Consistently spending time on what one likes best always pays dividends. At least, this is what composer, songwriter, guitarist, dancer and singer from Musina Bernard Tshibemuda Ndou believes and has applied to his own life. This may very well also be the reason why he was recently nominated as contender in the Best Rhumba Album category in the 2022 Amaqhawanentaba Music Awards.

Amaqhawanentaba FM, an online radio station based at Orange Grove in Gauteng, launched the awards last year with the intention to honour South African artists for their contribution to the arts industry.

Ndou (37) will be battling it out with 15 other fellow rhumba musicians. For him, being nominated for such an award is the first step, and he is crossing his fingers that the outcome will be good. “I always aim to produce good music that will entertain listeners when they hear it on the radio. With a little help from the fans, I might just take this award home, so please send in your votes,” he said.

Ndou started his music career in his teens when, in 2004, he rubbed shoulders with successful Zimbabwean musicians in Johannesburg. From that time on he has never let rhumba fans down. He has his own band, called Bernard Tshibemuda & Uvuwa na u ima express. His wife, Zwodangani Anikie Kwinda (stage name Faneli) and his son, Hardlife Tshibemuda (stage name Hansoman Style Ndou) are also members of his band. Zwodangani is the band’s drum beater, backing vocalist and dancer, and she can also play a little bit of rhythm guitar, while Hardlife is on bass guitar, backing vocals and chanting.

His music is often played on local radio stations (Musina FM, Phalaphala FM, Makhado FM, Nzhelele FM, and Vuwani FM), as well as on the Zimbabwe Broadcasting Corporation (ZBC). In March this year, Ndou released his sixth album, called Utikedzana (which means to support each other). For more information, contact Ndou on 073 109 3489. 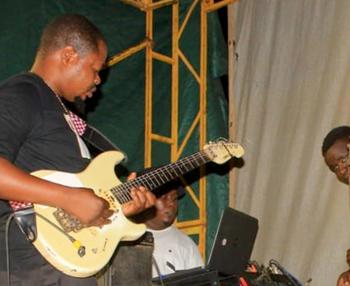