Patrice Mabasa is one of Vhembe’s true gems. The man has an inborn talent that discerns him from others - making art that really captures the eye. He is not only famed for his extraordinary paintings and sculptures locally; he is an internationally renowned artist whose work has been exhibited in countries such as France and Britain.

Mabasa has won numerous awards and he has also won competitions such as the National ABSA Fine Arts competition. His work has even been published in the AA Traveller’s Art Guide.

Mabasa (47), a resident of Mavambe village outside Malamulele, studied fine art at Wits Technicon but could not complete his studies because of financial constraints. “This was not the end of the world for me, though. The two years at the institution brought a lot of insight into my work,” he said, and so he returned home to throw himself into his art.

The artist has come a long way since his request to meet the late Nelson Mandela and Thabo Mbeki in 2006, so that he could personally give them the half-bust sculptures he had made of them at the time.

He was granted his wish in 2008, when he got the opportunity to meet Mbeki, who was still president then. “The president was very impressed with my talent and the Department of Sports Arts and Culture started sponsoring me. Realising that there were many unemployed youths, I built a training centre in Malamulele, where I now train young people in artwork. There was an amazing response from the community from the start, with more than 20 students lining up at my office for training.” He says he wants to continue to transfer his skills to the youth, including his own three children.

Making art is Mabasa’s means of living. He vividly remembers how his passion for art started even before he went to school as a little boy. He says he used to draw pencil sketches of people and landscapes, which he sold. “By 1993, I found that customers were not that interested in my drawings anymore, so I started making flowerpots from clay. I marketed my art in Malamulele and Thohoyandou,” he said.

As the country commemorates the 1976 Soweto Youth Uprising, Mabasa has dedicated three weeks to making two sculptures, one depicting the dying 12-year-old schoolboy, Zolile Hector Pieterson, who was shot and killed during the uprising. Mabasa is planning to donate these sculptures to the Department of Sports, Arts and Culture. 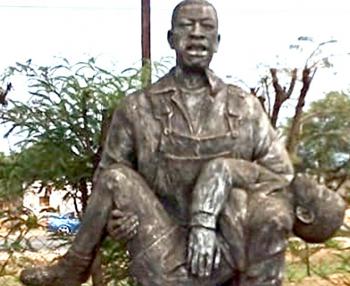 This sculpture by Patrice Mabasa depicts the dying 12-year-old schoolboy, Zolile Hector Pieterson, who was shot and killed during the 1976 Soweto Youth Uprising. Mabasa plans on donating the sculpture to the Department of Sports, Arts and Culture. Photo: Patrice Mabasa.