The gloom and sadness that resulted from the dreaded Covid-19 pandemic, which forced people to the confines of their homes, must come to an end now. This is the time to get out again and have fun. So says singer and dancer Tshanduko Maano, or ‘Mazwale’ as she is known in music circles, from Mapate village outside Thohoyandou.

Mazwale (26) had fans eating out of her hand during a promotional show for her new album, Mazwale Ha na Mungana. The show was held in Thohoyandou on Saturday, 11 June, where she gave music lovers a performance they will never forget, showing off her unique dance moves and a taste of some of her latest songs.

The title track on the new album, Mazwale Ha na Mungana especially, was a big hit among fans. The Usivhone Bere U Khanya hit-maker displayed a burst of renewed energy and enthusiasm that left the gathering crowds clapping and singing along to each song.

Mazwale says that the upcoming album was nearing completion and would be released by September this year. This will be her eighth album, with six exciting new tracks to look forward to.

She says that she missed her fans and doing live performances tremendously. “Here we are back again and taking off where we left off two years ago. We are bringing back the good vibes to the people, and I can assure you that the best is still to come. My new album is a bomb, and I know you will enjoy it. I thank you, my fans, from the bottom of my heart for your continued support even during these difficult times. Thohoyandou is where it all started, and you are privileged to be the first to hear my new album,” she said.

She will soon embark on the promotional tour for her new album. Her music is available in all digital platforms. For album orders and bookings, contact Mazwale at 066 037 0085. 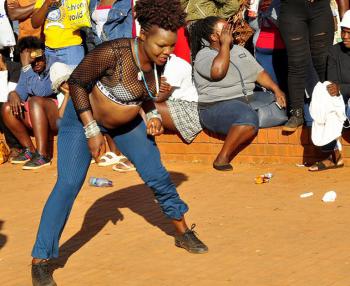 The evergreen Mazwale wowed fans last weekend during a promotional show for her upcoming album in Thohoyandou. Photo: Elmon Tshikhudo.