Muthuhadini Murathi from Give Tshandai in Ha-Mashau is an internationally recognised wood sculptor who believes that art – in whichever form - can be used as a vehicle for social change.

Born and raised in Tshakhuma village, Murathi (54) relocated to Give Tshandai in Ha-Mashau in 2006. He inherited his love of art from his late father, Kanakana Murathi, who was a craftsman in wood art, and a singer and performer of traditional Venda music and drama.

Murathi’s work touches on culture and modern life. His sculptures have been exhibited around Limpopo, Gauteng, and even in oversees galleries, such as the Netherlands, USA and Switzerland. Today he proudly exhibits some of his art at his home gallery.

“When I carve, I’m influenced by the day-to-day lives of people. I love indigenous knowledge. I dream about my sculptures. Sometimes I use the exact shape of the wood, but I first think of the idea in my mind before I start carving,” he said.

Murathi’s passion for wood sculpting was sparked 15 years ago when he visited the Ditike Art Gallery at Muledane in Thohoyandou. “I entered the gallery and found people selling sculptures. Then I heard someone saying some of the sculptures were sold at R100 a piece. I went back home, took a chisel and nails and started to carve a sculpture out of soft stone,” he said.

His first sculpture was a traditional sculpture called Greeting of the Vhavenda-speaking people, which he sold at the Ditike Art Gallery. After the collapse of Ditike, he sold his sculptures by the roadside.

Murathi said that, with the art industry not being spared the effects of Covid-19, sales of his sculptures had dropped significantly. He now also teaches herbal medicine to traditional doctors. “Because of Covid-19, I don’t have many customers now, but I am still working on my sculptures. Art is my calling from God, and I will never stop doing it. It brings something new to the people from rural villages,” he said. 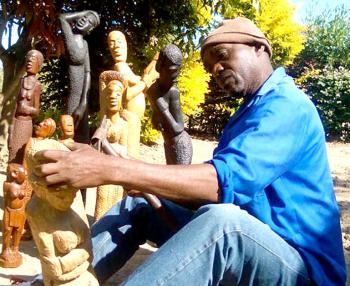