One man’s vision and dream to make a difference have literally changed the lives of hundreds of people across the world with his efforts to restore their vision.

Koen van Pottelbergh from Belgium and his team from Eyes For The World, a non-profit foundation he started, visited schools in the Elim area this week with only one goal – to help improve people's eyesight.

The Zoutpansberger caught up with Koen on Monday evening shortly after their arrival in the Soutpansberg. He and his team were welcomed by the Louis Trichardt Agora ladies who, in partnership with their sister club in Belgium (Agora Lokeren Belgium), invited Koen as part of an international support project. Agora Lokeren has generously sponsored the Eyes For The World Project, with Agora Louis Trichardt to do the same by raising funds for the project.

“Agora has worked closely with the Department of Education, who enthusiastically bought into this project and gave support in identifying three schools where screening will take place. These schools are Elim Primary, Masungulo Primary and Ozias Davhane High School,” said Sandy van Niekerk from the local Agora Club.

The project entails testing children’s eyes and giving them a pair a spectacles if needed. But these aren’t just ordinary spectacles. They are the product of years of research and development, allowing Koen and his team to hand each child in need thereof a pair of spectacles  within five minutes after testing starts – at no charge and with no waiting period to have the spectacles made.

For this purpose, Koen makes use of adjustable spectacles (Adspecs) or focussed spectacles (Focusspec). These spectacles were specifically developed for this project. With the Adspecs, high-quality silicone gel is pumped in between two durable plastic membranes. It allows for 50 optical variants, all possible in one pair of spectacles. Focusspecs, on the other hand, make use of an adjustable slide lens system whereby two lenses are slid across each other to the required magnification.

Koen became an optometrist in 1988 and comes from a long line of optometrists in his family. He has always had a passion for his work, but were it not for a near-fatal accident, he would never have been able to help hundreds of people across the world who are struggling with poor eyesight. He was severely injured, lost the sight in one of his eyes and struggled for months to recover. This included learning to walk again. “I asked myself why, but I could not answer that. I then realized that I wanted to do something for people,” said Koen.

Koen came up with the idea of helping to improve people’s eyesight by means of adjustable spectacles in 1985. Through his travels, he identified many problems. The biggest problem he identified was people who could not afford a pair of spectacles, and not just in developing countries.

His research into affordable spectacles brought him into contact with Prof Joshua Silver, a professor of physics at Oxford University, of the Centre for Vision. The two started working together in an effort to come up with a solution. Prof Silver played around with a couple of ideas and manufactured the first pair of adjustable spectacles about eight years ago. “I told Joshua that the spectacles were too heavy and that he must remember that we were working with children. We had a chat and brainstormed and created a new design that was much more comfortable to wear and three times lighter than the initial spectacles,” Koen said.

The new Adspecs were announced to the media in 2013. Since then, Koen and his team have been traveling the world and distributing these spectacles. Although they are given out for free, they cost around 20 Euros per set to manufacture. Because of this, Eyes For The World rely heavily on donations.

“My motto is that everyone in the world has the right to good eyesight,” said Koen. But the visit to Elim, where 300 pairs of spectacles were handed out over a two-day period, will not stop there. “We want to come back every three or four years and follow up on the children,” Koen said. This is where, he said, local people and businesses can play a huge role. Businesses like Specsavers in Louis Trichardt are already on-board with the project. “Our policy states that every child under 13 years can qualify for a pair of free spectacles,” said Sanri du Plessis of Specsavers in Louis Trichardt. From her side, she will follow up on children who are in need of more specialised treatment that a normal pair of spectacles cannot solve and who have been identified at the schools visited.

“I think we can help about 85% children around the world through projects like these,” Koen said. For the first time ever, they have also used a small mobile eye tester, developed by Rockmed, during their visit. This allowed them to do more specialised and accurate tests on the children.

Koen and his Eyes For The World team wrapped up their visit to the region on Wednesday, but it was not yet time to depart for home again. They will also be visiting Soweto, where they will be distributing a further 200 spectacles as part of their project.

For more information on the Eyes For The World Foundation and the work they do, Koen invited residents to visit their website at http://www.eyesfortheworld.be/en/index.html. 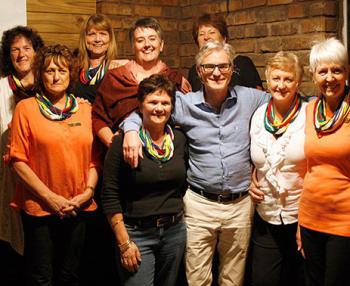 Koen and his team were welcomed by the Louis Trichardt Agora ladies who, in partnership with their sister club in Belgium (Agora Lokeren Belgium), invited Koen as part of an international support project. Pictured is Koen with local Agora members on Monday.

Koen van Pottelbergh (right) from Belgium and his team from Eyes For The World this week visited schools in the Elim area with only one goal – to help improve people's eyesight. Left is Ms Nelly Tlakhula, chief education specialist from the Department of Education in Polokwane. The department hasbought into Koen’s project very enthusiastically . With them is one of the youngsters who benefitted from the project by having his sight restored by means of the unique adjustable spectacles. Photo: Laura van Zyl.