We have money to revive VBS - Muvhulawa

An application to liquidate the embattled VBS Mutual Bank will be heard in the High Court next Tuesday (13th). A group of local shareholders and account holders have, however, vowed to fight back, saying that the bank can still be rescued and that the funds can be raised to make it profitable again.

In March this year, the South African Reserve Bank placed VBS Mutual Bank under curatorship when it became evident that the mutual bank was experiencing a liquidity crisis. The curator very quickly realised that large-scale looting was happening at the bank and a forensic investigation followed. Advocate Terry Motau, who headed the investigation, concluded that “the perpetrators of the heist at VBS made away with almost R2 billion.”

In October, the report was handed over to the banking regulator, the Prudential Authority. Last week, the regulator took the matter to court, asking that the curatorship be ended and for permission to wind up the affairs of the bank. The regulator is of the opinion that VBS is hopelessly insolvent, with no prospect of saving the bank.

According to the regulator, the decision to apply for liquidation is compulsory. “The law states that when the registrar of banks is of the view that the bank is insolvent, they are legally obliged to go to court to apply for liquidation. This does not mean that the bank cannot be saved. But it does mean that the registrar is of the view – based on all the available evidence – that the bank is insolvent and probably can’t be saved,” the Reserve Bank said in response to a question posed by Jannie Rossouw, who is Head of the School of Economic and Business Sciences at the University of the Witwatersrand.

In the interview with Rossouw, the Reserve Bank said that liquidation provided for the winding down of a bank under the terms set out in the Companies Act. “The bank will still be managed to maximise depositor value, to collect on loans and to recover as much money as possible. It does, however, reduce the discretion on the creditor hierarchy. In other words, a curator has more discretion about who gets paid out what amount. Under liquidation, that discretion is removed,” the bank said. (Source: Biznews).

The Reserve Bank believes that the liquidation of the bank will be beneficial to the creditors and depositors of VBS. “All retail depositors who have deposits of less than R100 000 in the bank, have had, and continue to have, full access to their funds through the facilitation of Nedbank since 13 July 2018,” the curator, Anoosh Rooplal, said in a statement last week. “Should the bank begin the process of liquidation, the loan contracts will continue to be enforceable,” he added.

Rooplal and his team currently continue to recover assets resulting from the theft and fraud discovered during the investigations. A liquidation order was granted against the Vele group, which was placed into liquidation on 3 August 2018. Provisional sequestration orders were granted in August on Andile Ramavhunga, Robert Madzonga, Tshifhiwa Matodzi, Phillipus Truter and Phopi Mukhodobwane. “Currently, their assets are being secured and effectively frozen, so as to prohibit dilution of their value,” Rooplal said.

Last Thursday (1st) a special prayer service was held near Thohoyandou. The event was organised by the Vhembe Pastors’ Forum. According to one of the organisers, Dr Alunamutwe Randitsheni, the prayer service came about as an intervention to the cries of the community, more specifically those affected by the VBS fiasco.

Speaking during the service, one of the shareholders of the bank, Mr Madambi Muvhulawa, said that a few greedy individuals had looted the funds of the poor in Vhembe. “We started this bank with good intentions that even those who do not qualify for loans at mainstream banks benefit, and this has happened. Things started getting out of hand when the board that carried the mandate of the bank was voted out through fraudulent means. The new board employed their ‘educated’ friends who stole all the money and the bank collapsed and was placed under curatorship,” said Madambi.

Madambi argued that VBS should not be closed but rather revived and “that all the implicated parties be arrested and pay back what they have stolen.” He said they had already assembled a legal team to help with the process.

“He (the Reserve Bank governor) said R2 billion was needed to revive the bank and we have that money. We can even up it to R5 billion, and our plan is to change the bank from a mutual bank to a commercial bank,” he said.

Speaking during the prayer service, Bishop Nditsheni Khodoga said what had happened at VBS was a disgrace and the church would not keep quiet. “We are here to kneel before God and ask that He intervenes in this situation,” said Khodoga.

From the prayer service, the pastors, accompanied by other stakeholders, marched to the Thohoyandou VBS branch where they handed over memorandums to the curator’s representative, Mr Nditsheni Tshithavhane, and Mr Anderson Mudunungu, who represented the ANC. 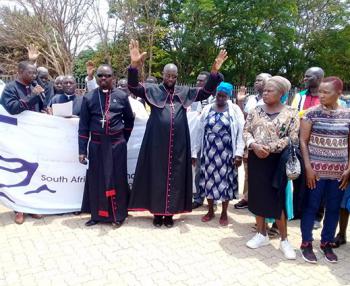 SACC General Secretary Rev Parkson Mohlala (right) reads the memorandum before handing it over to Mr Anderson Mudunungu, who represented the ANC. Also in the picture are other pastors and the VBS curator's representative, Mr Nditsheni Tshithavhane