Keeping any wild animal without a permit is illegal

The Louis Trichardt SPCA wants to make sure that people are aware that keeping any wild animal without a permit, regardless of how one finds it, is illegal. That does not mean that people should leave an injured or at-risk creature to face certain death, but keeping them in one's home thereafter, caged or otherwise, is illegal.

Alicia Thomas of the local SPCA shared several accounts of people taking in baby animals that had been orphaned out of the goodness of their hearts, and then surrendering them to the SPCA when they grew too big or difficult to manage. “Monkeys,” said Alicia, “can be very cute when they are babies, wearing flower-patterned nappies and sucking milk from a bottle. When they are fully grown, however, they can be frightening when they follow their instinct and bare their fangs at someone they perceive to be threatening them or their adopted human ‘family’. This is usually the point at which the adopted wild animal is handed over to the SPCA.”

Alicia said that this was very traumatic for all concerned. For the family who tried to be kind and care for an orphaned baby animal, and especially for the animal that is sent on to rehabilitators without knowing what it had done wrong or why it had been abandoned by the only ‘family’ it had ever known. She said that they had had a large variety of different species surrendered to the SPCA when they became a little too big or too prone to biting to handle, including meerkats, badgers, birds and many other creatures.

“By the time they get to us,” said Alicia, “they are too old to be rehabilitated into the wild, and so they go to sanctuaries to live out their natural lives. While this is not as ideal for any creature as remaining in the wild where they belong, it is much better than being caged or otherwise being treated badly because of a lack of knowledge, rather than malice.”

The SPCA would like people to remember that domesticated wild animals are often abused unintentionally when the novelty of having them wears off. They end up locked away in inappropriately sized cages or enclosures, fed inappropriate food, and so can lead horrible lives before they die. Worse still, sometimes they are released into the wild at points where they have no idea how to feed or look after themselves. “Please contact us at any point if you have a wild animal in your care. The SPCA's main concern is to help the animal, rather than ‘to punish those who are not intentionally doing anything harmful’.”

This breeding season, the SPCA encourages all residents to please hand over any wild animals to them as soon as possible after finding them. This way, they have a chance of being released back into the wild when they are ready by experts in the rehabilitation of wildlife. If unsure about how to do this, consult the NSPCA’s website for instructions at https://nspca.co.za/what-to-do-with-wildlife/ or else phone senior inspector Lawrence Khodobo on 082 965 5151 at the local SPCA as soon as possible, and he will guide residents through what needs to be done. 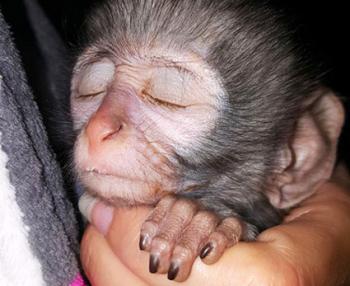 All baby animals are cute, says Alicia Thomas of the Louis Trichardt SPCA, but keeping them without a permit is illegal. Photo supplied.

The SPCA asks people to hand in orphaned or injured baby animals straight away, rather than surrendering them when doing so is traumatic for all concerned and too late to rehabilitate them into the wild. There are centres who know how all wild animals need to be treated, whether young, old, injured or not. Contact the SPCA as soon as you find one.