Road blocks part of efforts to stop spread of FMD

A disease-management area, roadblocks and an intensive vaccination programme are among the steps taken by the Department of Agriculture, Forestry and Fisheries (DAFF) to minimize the spread and to eradicate the foot-and-mouth (FMD) disease outbreak in Vhembe.

This according to a joint statement by DAFF minister Senzeni Zokwana and the Red Meat Industry, following a meeting in Pretoria on Monday with the government and industry stakeholders on the crisis.

The FMD outbreak at Sundani Village near Vuwani at the beginning of January caused South-Africa to lose its recognised FMD-free-zone status with the World Organisation for Animal Health (OIE). This has had a devastating effect on the trade in cloven-hoofed animals and their products from South Africa. While some countries instituted official bans, trade was further disrupted as a result of the inability to certify any exports that require FMD-free-zone attestation.

“I must commend the contributions so far from the industry, in particular at technical committees’ level. The update we are giving today is the cumulative work of the collective past two weeks,” said Zokwana.

Zokwana said that his department had updated the country’s trade partners on the FMD outbreak in South Africa. He added that a request had been made to trade partners to consider the continuation of trade in safe products. Guarantees were also provided for products that do not pose a risk of transmitting the disease, such as heat-treated meat and dairy products, deboned and matured beef, scoured wool, salted hides and skins, livestock embryos and pork products from known FMD-free pig compartments. “Following the sharing of update reports with trade partners, trade restrictions on the export of processed products have been relaxed by many trade partners. Trade in safe commodities to direct neighbouring countries have largely been accepted and, where necessary, negotiation of new health certificates is underway,” said Zokwana. He added that good progress had also been made with negotiations to re-open markets for deboned matured beef, processed dairy products and processed hides and skins to the other African countries, the Middle East and the Far East.

According to Zokwana, up to 30 January this year, four positive locations for FMD in Limpopo Province had been reported to the OIE. The animals affected by the outbreak are cattle kept in rural villages with communal dip tanks and grazing.  The affected villages are in close proximity, within a 20km radius. The estimated number of cattle in the 20km around the affected villages is 15 000, of which 4 500 are in the FMD-free zone.

A disease-management area has subsequently been declared, namely the area enclosed by the R81, R36, N1 and R524 roads. “A Joint Operations Committee (JOC) was established and meets on a daily basis, consisting of traffic, departmental and district disaster management, police, industry (the National Animal Health Forum, Feedlot Association) and provincial and DAFF veterinary officials. The JOC has facilitated the placement of 15 road blocks at strategic points to restrict the movement of animals,” said Zokwana. One of these road blocks was established on the R524 between Louis Trichardt and Thohoyandou at the Beja-turnoff.

Emphasising the importance of containing the spread of the disease within the FMD management area once again, Zokwana said that the movement of cloven-hoofed animals (including wildlife) and unprocessed products out of the Mopani and Vhembe Districts, as well as the Molemole Municipality of Capricorn District, was discouraged until further notice. “As mentioned above, it is only products processed using methods validated to inactivate the FMD virus that are safe to be moved out of the area,” said Zokwana.

At face value, the government appears to have gone out of its way to curb the spread of the disease effectively. Some farmers, however, are of the opinion that, at ground level, this enthusiasm to stop the spread of the disease is not shared. Specific reference was made to the FMD-control road block on the R524 at Beja some 30km from Louis Trichardt. The road block was set up about two weeks ago. The road block was, however, found completely deserted last Friday, apparently for the whole day. The Zoutpansberger informed the department of this and asked for a response on the status and functionality of this and other road blocks in the management area.

In response, departmental spokesperson for the DAFF Mr Steve Galane said that the situation around the Makhado road blocks in Limpopo had been resolved. Money to man the control point seemed to have been the problem. “Our HOD Ms Maisela made a commitment to the SAPS about their payment. All the road blocks have veterinary officials and traffic police. The SAPS in Makhado will also deploy police to the road blocks. They have officials who will be doing spot checks and we requested officials to be deployed to the road block for 24hrs [period]. No road block was left unattended without the presence of veterinary officials,” said Galane. 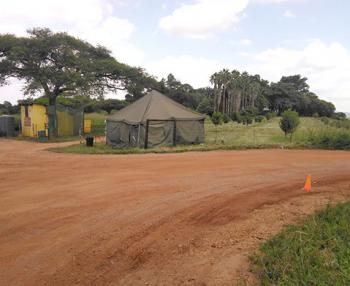 The FMD road block at the Beja turnoff on the R524 road to Thohoyandou was found completely abandoned last Friday amidst extensive efforts by the government and industry stakeholders to stop the spread of the disease. Photo supplied.

The FMD-management area in Vhembe. Fifteen road blocks at strategic points to restrict the movement of cloven-hoofed animals were established in the area. Map: DAFF.