The Department of Transport has received a major boost, following the passing out of 238 traffic officers last Friday.

The officers received their certificates from the MEC for Transport and Community Safety, Ms Makoma Makhurupetje, during a passing-out parade that was held at the Limpopo Traffic College, Tshilamba, in Mutale.

Makhurupetje said that she was proud that the new officers were qualified after a full year of dedicated training. More than 240 students were selected for the Learnership on Basic Traffic Diploma in January last year. It was also announced that 238 had completed the programme.

Makhurupetje said that the students met the standards demanded by the college and its instructors, which made it a commendable achievement. “By passing this course today, you have not only done yourself proud, but have also made your instructors happy.” She revealed that the graduates were also trained in modules that follow military procedures since the traffic profession in its entirety is a para-military one.

She also assured Thovhele Vho-Bvudzitshena Nethengwe that there was no plan to move the college away from Mutale as was being speculated.

Makhurupetje also mentioned that R20 million will be spent in this financial year to refurbish the buildings that were built by the former Venda government when it was still called Manenu Battalion. The first building to be refurbished will be the student residence.  Another R10 million will be spent on the purchasing of high-powered vehicles that will be exclusively used by traffic officers.

She added that the province needed more officers since vehicles and drivers had increased significantly since the previous year. She added that, according to statistics, the number of vehicles on the roads in Limpopo were increasing. “That calls for an increase in the number of road networks, but also for more traffic officers with vehicles to enforce the law.”

According to her, the province is proud “of the strides made by our officers during the festive season.  From 395 accidents reported in 2017, we managed to reduce this number to 389 last year,” she said. The number of fatal crashes during the same period also reduced by 4%.

During the ceremony, three students received certificates and trophies from the MEC.  Tebogo Matlala from Waterberg was the best student, while Tebogo Manamela from Mopani received awards for discipline and professional conduct. Kelebogile Mothupi from Waterberg received an award as the best shot on the course. 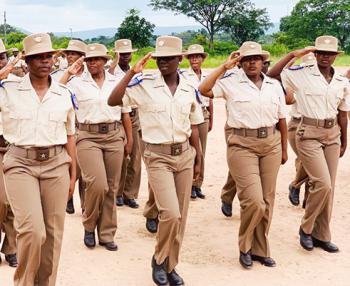 Some of the graduates during the passing out of 238 traffic officers held at Limpopo Traffic College in Mutale last Friday.

The MEC for Transport and Community Safety, Ms Makoma Makhurupetje