The spate of violent crimes that sometimes result in the loss of human life, is becoming a source of great concern in the Makonde area.

Crime has become so rampant that residents confine themselves to their houses as darkness fall.

In one of these shocking and violent crimes, an unknown man, aged around 40, was found killed not far from a bridge to Matangari outside Thohoyandou. Those who saw the body said that a bullet wound was visible. The incident happened on Tuesday evening around 20:00.

Community leader Vhakoma Vho Livhuwani Ravhura, who happened to be at the scene, said it has become one of the most disturbing issues in the community. “There is never a week that passes by without an incident of crime here. We are no longer safe here and we must hide ourselves in houses when it is dark, but even there we are not safe as they even break doors to commit crime. There has been so many robberies and killings where firearms were used,” he said.

He added that they did not know the dead man, but said residents living close by said they heard gunshots at around 20:00.

He further indicated that the man might be from somewhere else and was likely to have been brought there by a car and shot dead. There was a pool of blood at the spot where he was killed after being dragged to nearby bushes.

He added that they are taking issues of crime very seriously and will make it a standing agenda point during their meetings. 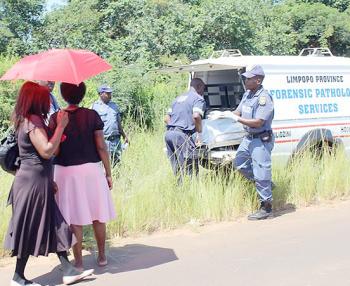 People are looking on while staff members of the SAPS' forensic services are loading the body of the unknown man in their van for further investigations.

Blood at the spot where the unknown man was murdered.