Women's challenges in the spotlight

Challenges facing young women were in the spotlight during the International Women’s Day celebration that was held at the new Nancefield community hall, Musina, last Friday. The event was organized by the Limpopo Office of the Premier, in association with the Musina Municipality.

The MEC for Health, Dr Phophi Ramathuba, said holding this event was important to educate community members on the plight of women. “Women are faced with various challenges that hinder their progress on a daily basis. These include rape, teenage pregnancies, sexually transmitted diseases and several criminal activities. We have to face these challenges head-on to pave the way for a better future amongst women in our society.”

She said no doubt existed that women had played a major role in the attainment of freedom that South Africans were enjoying today. “Government has done extensive work to empower women after 1994. We are supporting women in farming, business and other community-building initiatives. We have many women who are occupying senior positions both in government and the private sector. We have women who are representing us well in parliament, provincial legislatures and in municipalities. Despite all this, we will not rest until we are sure that there is no woman who goes to bed on an empty stomach because of poverty.”

Ramathuba urged women to report all types of abuse to the relevant authorities. She said that the government would not tolerate a situation where women were abused “by senseless individuals”.

Cllr Nkele Milanzi from Musina Municipality said the celebration was very important on the calendar of the municipality. “This day has been celebrated for the past 108 years and it was important for us to join the world in the fight against the abuse of women.” 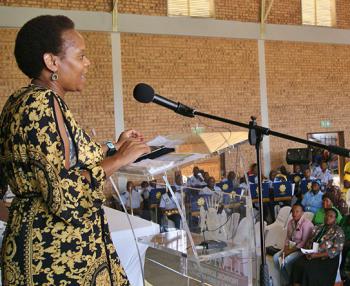 The MEC for Health, Dr Phophi Ramathuba, addresses the audience during the International Women’s Day at Musina last week.