The two Fidelity security guards who were arrested on 16 January after almost R2,6 million was found buried in the ground, pleaded guilty to a charge of theft in the Louis Trichardt Magistrate’s Court last Wednesday, 3 April. They will, however, have to wait until mid-May to find out what their sentences will be.

The 31-year-old Rofhiwa Emmanuel Luvhimbi from Ha Ravele and 41-year-old Tinyiko Thomas Maluleke from Elim both pleaded guilty of stealing the money from their employer at the time, Fidelity CIT in Louis Trichardt, between the period of 14 December 2018 and 16 January 2019.

The two were arrested after a team of operatives comprising members derived from the Provincial Organized Crime unit, Crime Intelligence, the Makhado Task Team and Thohoyandou Tactical Response Team (TRT) wereassembled to conduct a well-coordinated operation at different identified sites. This after information was received of a substantial amount of money that went missing from Fidelity in Louis Trichardt.

The operation, which commenced on the afternoon of 16 January, proceeded through the night until the next morning. Characterized by relentless searches, probing and digging by the members at three different premises, the effort produced positive results when the cash was found buried in the backyards of the identified sites. Some of the cash was found stashed in ice cream containers and refuse bags.

Although the police initially recovered just over R2,6 million in stolen money, the amount on the charge sheet that went missing totalled just over R2,9 million. One of the suspects had already also bought a double-cab vehicle, which was confiscated by the police.

Luvhimbi and Maluleke’s case was postponed for sentencing until 13 to 15 May and both will remain in custody until then. The reason for the postponement was to obtain pre-sentence reports since the offence carries minimum sentences. According to Section 51(2), read with Part II of Schedule 2 of the Criminal Law Amendment Act, Act 105 of 1997, the minimum sentence for a first offender is no less than 15 years, no less than 20 years for a second offender and no less than 25 years for a third-time offender. 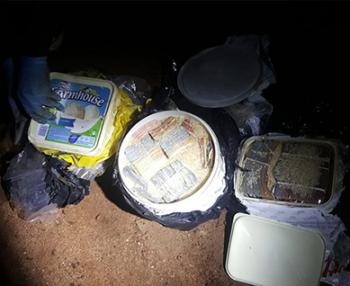 Buckets full of money, totalling around R2,6 million, were recovered by the police. Photo: Limpopo SAPS.

Some of the cash was found stashed in holes in ice cream containers and refuse bags. Photo: Limpopo SAPS.