Help pours in for Xigalo children

A group of philanthropists brought smiles to the faces of destitute Hlungwani children when they donated food parcels and clothes to them earlier this week.

Tikvha Foundation, in association with TG Training Academy and Security, drove from Elim to Xigalo to extend a gesture of kindness and make a difference to the lives of the children who need help in life.

“We heard about the children's plight and also read the story in Limpopo Mirror and realised that they were living in heart-breaking conditions,” said Tikvha Foundation Foundation's Mr Ashley Mabasa. “We wanted to help them with food and clothes, so they could feel a sense of relief from the pain and frustration of not knowing where to get the next meal from.”

Limpopo Mirror recently carried a story of a sickly 13-year-old boy who was spotted roaming the streets of Malamulele town and asking for food from townspeople. The boy, along with his older sister Tsakani Hlungwani (20) and a brother (18), were said to have been kicked out of their home by their father. They found a shack to stay in from a Good Samaritan who empathised with them. However, the sister, who has two children (a three-year-old son and an eight-month-old daughter) later moved out to live with a partner, leaving the 13-year-old brother with an older brother who spent most of his time away.

“We learned about the boy's condition and felt a need to help improve his living conditions arise in our hearts,” said Mabasa.

The Tikvha Foundation's team could not meet up with the boy because the social workers’ regional office had removed the boy from home to a place of safety to convalesce shortly after Limpopo Mirror's visit to his home. “They said they would bring him back after a week or two,” said Tsakani. “But all along they were not doing anything to help him or any of us. Now that you have come here, they are acting as if they were helping all along.”

She thanked Tikvha Foundation and all other readers who had helped or either attempted to extend help after seeing the story.

Meanwhile, another reader, who is based in Gauteng, saw the story in Limpopo Mirror online and offered to get the 13-year-old boy food to the value of R1 000, but the boy had been removed from the shack he shared with his brother. “I am really touched by the boy's plight, it's painful,” she said. 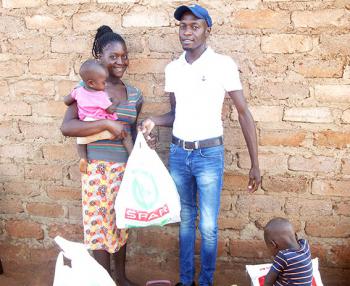