Municipality to terminate all lease agreements with sport clubs

Amateur sport clubs who currently have 99-year lease agreements with the Makhado Municipality may soon find themselves out on the street with regard to the municipality’s intention to terminate these agreements.

Many might wonder about the reason for this move. The Makhado Municipality best answered this question. “The whites-only predecessor of the Makhado Municipality, Louis Trichardt Local Authority, has during the period 1993, 1994 and 1995, just at the dawn of the new constitutional dispensation, concluded 99-year lease agreements with the whites-only sporting clubs. Ever since the establishment of the Makhado Local Municipality, Council has questioned these dubious decisions by the former Louis Trichardt Council as it smells [of] racial discrimination. Council has previously commissioned two legal opinions which both of them confirmed, that if the lease agreements can be concluded on a breach of the material provision of the lease agreement, that it be expropriated by the municipality for public interest,” states the municipality in its minutes under the above item.

The municipality gave Munonde Attorneys & Conveyancers instruction to furnish them with a legal opinion on the issue and to look at the “specific process that must be followed in terminating or affecting the termination” of the lease agreements.

In a nutshell, the Makhado Municipality opted for the latter option, that of “sound reasons” as Munonde Attorneys & Conveyancers had already indicated in their legal opinion that they could find nothing in the agreements that could constitute a breach of contract.

But what constitutes a sound reason? The answer to this question is what the municipality is currently looking for. According to the legal opinion, a sound reason is something “in public interest which outweighs the interest of the sporting clubs”.

What is worrying is that all the affected sport clubs the Zoutpansberger spoke to said that, to date, the municipality had made no effort to communicate these intentions to them. “As usual, the municipality communicates nothing. They just do what they want. To date we’ve not received any notice. They are looking for reasons to kick us out. All we can do is to comply with the legal requirements of our agreement,” said Kevin Gilbert, chairman of the Louis Trichardt Rugby Club. This club was recently relocated to the municipality’s new sporting facilities next to Thohoyandou road and Gilbert had to sign a new contract. “All our stuff is up to date. We’ve signed a new contract for the remaining 59 years of our 99-year lease agreement,” said Gilbert. He added that they had an open membership and were totally racially integrated.

Ronel Welman, chairperson of the Soutpansberg Squash Club (which also has an open membership), also said that, to date, they had received no notice of the municipality’s intention. “At this stage, we don’t even know if we are going to be relocated,” said Welman. The squash club is one of the clubs earmarked for relocation to make way for the expansions to the Makhado Crossing shopping mall. “There is no communication from the municipality,” said Welman.

Both Gilbert and Welman said that they would take the municipality to court if their lease agreements were terminated. The other sports clubs are sure to follow suit. The municipality is also well aware of this possibility, warning of an “ensuing legal battle if the sporting clubs do not accept the reasons advanced by Council to be in public interest”.

As for now, the 11 sporting clubs can do nothing but wait. They can only act after the council has issued them notice to cancel their lease agreements. This must be done six months in advance. The Makhado Municipality was asked to respond to the latest developments but at the time of our going to press had yet to do so. 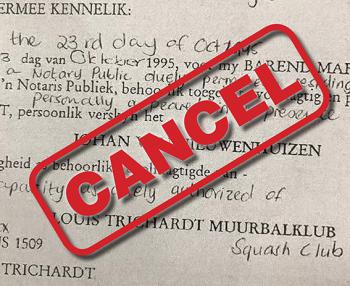