The bright lights and the comfort zone back in Ireland where he works could not make him forget his roots or stop him from fulfilling his traditional role back home at Ngovhela outside Thohoyandou.

As a sign of his new role in the community, Novhe, a nurse by profession, was given a hat and a walking stick during the ceremony.

The age-old tshikona and malende dances were the order of the day during the ceremony.

In his speech, local senior traditional leader Thovhele Raison Sikhwivhilu told the new leader to respect and work with the people he was leading. "You are not alone on your own island. Know that there are people and structures that you should work with in the community. Work with them and report whatever happens in your area to me. At your level, you do not have the powers to preside over cases.”

He warned the new leader against womanising and alcohol abuse, saying they led to the downfall of many leaders. In response, Vhavenda Vho-Novhe said he saw nothing that would stop him from working towards development in his area.

"I am aware of the mammoth task ahead of me, but I have all hope that with the team that I am going to work with, we will do more for our people. My being overseas is an advantage on its own as we will be knocking on doors for people to come and assist in our developmental agenda. We are also calling upon all with skills, wherever they are, to come on board that, together with our senior traditional leader, we bring development to this area," he said. 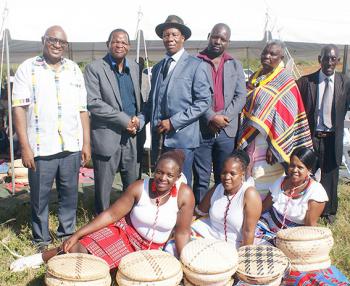